About a month ago, I decided that I wanted to start experimenting with Blab, the latest entry in the video-streaming world.

I had loved Google Hangouts, but found that it was pretty unstable, so moved about 6 months ago to using Zoom for the webinars and private video-conferencing that I do.

I also experimented with Periscope--that is, I looked at what was happening on Periscope--but it felt very limited in its capacity to actually engage people. It would basically be me talking and then people tapping on the screen to show love and submitting questions/comments through chat. It felt like a lot to manage for not a lot of real return on engagement.

So when Blab popped up, giving me an opportunity to have up to 3 other guests coming in and out of the Blabs, that seemed way more appealing to me. I like to TALK with people if at all possible and with Blab, anyone can join into the conversations. I liked the serendipity of that.

We've been using Blab to run "Career Clinics"--I put out a topic, like "How to find a Mentor" or "Navigating Your Career in your 50's" and then we go into Blab to share ideas, talk about the issues, etc. As part of my commitment to doing more "working out loud," I wanted to share some of what I'm learning from running these sessions. 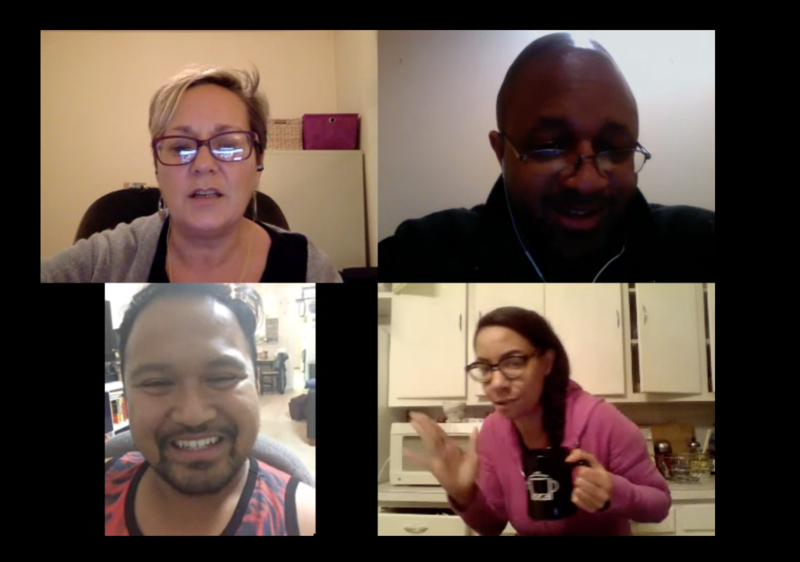 What I'm Learning from (and on) Blab

Blab is less about "presenting" and more about conversation.

One of the reasons I was interested in Blab in the first place was because it seemed to invite more engagement from the audience. Any participant can ask to join the conversation and with a click of a mouse, I can accept them into the video discussion.

I knew this, but for the first few Blabs we did, I was still in "presentation" mode, so had prepared extensive notes and outlines. Very quickly, though, I learned that kind of extensive preparation was not only unnecessary, but also tended to kill the energy of the conversations that were happening. Now I've learned to go with the flow and to allow the conversations to emerge. I prepare a few notes and thoughts, but focus much more on how I can try to ask questions and draw in the audience to participate.

Work with a "co-host" or have guests.

Because Blab is about conversations, it's a good idea to work with a co-host or to have scheduled guests join you on Blab. That way if you aren't getting engagement from the participants, you can still keep things active and interesting through your engagement with your co-host and/or your guest. I've seen a few Blabbers that do it alone, but I've found that my own attention tends to stay with Blabs where there are people having a conversation.

A lot (most?) of the "aha's" come from the participants.

I don't know if this is true for other Blabs, but in the Blabs we've been having, our participants have been amazing sources of information, ideas and inspiration. We're in Philadelphia and we've had people join us from Houston, Montreal, Portland, Atlanta, Scotland and even Pakistan! We put out some questions or ideas, but then they come in and take things to another level. It's been incredibly interesting, engaging and rewarding to make these new connections and learn so much from other people's experiences. Again, this is part of what intrigued me about using Blab and it's definitely been living up to what I wanted.

Where you start isn't necessarily where you're going to land--and you learn more when you're OK with that.

I know that some Blabbers are using Blab to share specific content. But that wasn't what interested me about the platform. I wanted to share ideas and also to get a feel for how other people are thinking about different career questions.

I set an initial topic, but have found that most of the time, the participants take the discussions in some new and sometimes surprising directions. In one of our first Blabs, we wanted to talk about navigating your career in your 50's, but ended up spending a lot of time talking with one woman about what she was doing in her 40's to set herself up for success in her 50's. We got a lot of great info there and she opened up some good discussion about how we can do a better job of preparing ourselves.

In last night's discussion on creating your career from inspiration and appreciation, we talked about topics ranging from how to inspire pre-schoolers at a museum to how someone is managing a career split between Montreal and Brooklyn and the differences between the two cultures.

For me, all of this is grist for the mill, as well as a way to build relationships and see where other people are coming from.

Where I'm Going From Here on Blab

November was a month for experimenting with Blab- seeing how the tech works (well, especially considering that it's in Beta) and getting a better feel for how I might want to use it to engage and learn.

One thing that's emerging for me is that I don't necessarily want to use it as a platform for "how to's" as we've been doing. What I'm observing is that there's a hunger for human connection and conversation about deeper issues. So part of what I want to do is explore how it works to use Blab to talk about some juicy questions--some related to work, maybe, but also questions that are bigger than that, as I'm more than just career stuff.

I also need to experiment with doing some Blabs during the day. We've been doing evening blabs because that's when my business partner/husband is available to be a co-host, but in December, we'll have the chance to do some sessions during the day and I'm curious to see if we'll get more involvement and engagement during working hours.

Right now I'm in the curiosity stage of learning about Blab--still being open to exploration and not quite sure where things might be going or where I want them to go. It's an interesting space to be in. I will say that I think it has a lot of potential, which is part of why I'm sticking with it for another 30-day experiment.