"Naked and Afraid" and "Surviving" at Work

My husband and I have become obsessed with Naked and Afraid.

In case you've missed it, it is the ultimate survival show. A man and a woman are dropped into a jungle somewhere with only one tool each--a knife, a fire starter, a length of rope--it's their choice. They have no food, no water and no clothes.

The goal of the show is that the pair must survive for 21 days in some really inhospitable locations. At the end of the 3 weeks, they must hike to the "extraction point," which is generally miles from where they've set up camp and usually involves a mountain to climb or a swamp to swim through. Remember, they have no clothes.

Each pair spends a lot of time building some kind of lean-to to sleep in and looking for fresh water and "protein." Everything is about "protein," which usually consists of bugs, lizards and if they're lucky maybe a bird or fish they've managed to catch.

They are living one day to the next, focused strictly on survival.

What fascinates me are their interactions.

A few of the pairs get along reasonably well throughout their 21 days of enforced naked togetherness. They support and coach each other and work together to locate those all-important protein and water sources.

But more often than not one of them will start complaining that the other isn't "pulling his/her weight." This usually happens when one of the pair does things differently than the other person would have chosen to do.

Someone will storm off at some point. Someone will yell. Someone will cry. On more than a few occasions someone has "tapped out"--Naked-and-Afraid-Speak for dropping out before the 21 days are up. This leaves the other half of the pair on their own to finish out the 3 weeks.

Regardless of whether or not the pair gets along, the deeper into the survival experience they get, the crankier they become. 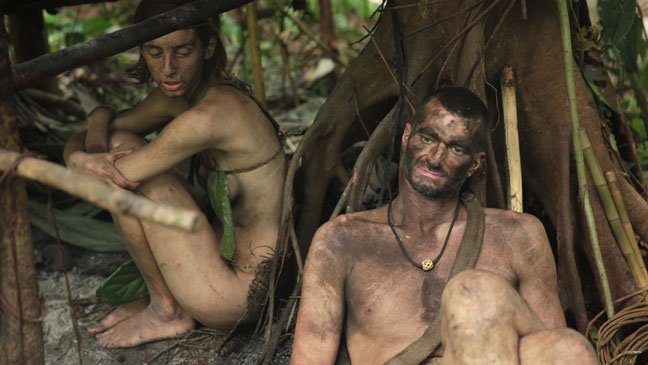 So what does all of this have to do with work?

Naked and Afraid is a portrait of people in survival mode--living in a hostile environment, lacking the tools they need to thrive. They are starving, sleep-deprived and I have to believe feeling vulnerable as hell. No shoes and no clothes in the jungle is no joke.

For many people, their work is a version of this hostile jungle. OK, the food is better and they can find water. But sleep deprivation is pretty common. Lack of tools and a general sense of hostility in the environment are common too.

While occasionally the experience brings out the best in a Naked and Afraid pair, usually it brings out the worst. They become mean and petty, with lots of bickering in between treks for water. Many of them seem to battle depression and despair, sinking into lethargy as the days go on.

This can happen at work, too. It's the survival mode that brings out the dysfunctional team dynamic.

What saves Naked and Afraid pairs is knowing that they only have to do it for 21 days--there is an end in sight. Surviving to the end becomes a challenge.

But would happen if there was no end they could see? They were just in this survival mode for the foreseeable future?

I'm thinking that it wouldn't be pretty.

That's where surviving your job can be worse than Naked and Afraid. You may not be starving physically, but mentally, emotionally and spiritually, you're in a desperate search for sustenance.  And you're trapped with other people who are in survival mode, too, which brings out the worst in everyone.

Of course Naked and Afraid is designed for entertainment. It purposely looks for the drama and shows us select pieces of what happens over the 21 days.

Still, I can't help feeling that many workplaces are a version of those hostile jungles. And that many of us are just trying to survive. . .

Are you in survival mode at work? Check out my online course on Recovering from the Toxic Workplace.  It can give you the tools you need to move from surviving to thriving.