Last Friday, I wrote about how technology is eating your job. Since then, I've been immersed in further exploring the extent to which this is true and finding more resources to convince you that this is one of the most critical trends impacting your career today.

First, if you care at all about the future of your job, I encourage you to watch Andrew McAfee's TEDXTalk in Boston above. It provides a compelling summary of how technology is impacting employment and will be the best 15 minutes you can invest in yourself today.  (Here's a link to a blog post about his February TEDTalk appearance, that builds on the video above.)

I want to pull from it an important chart that you need to pay attention to: 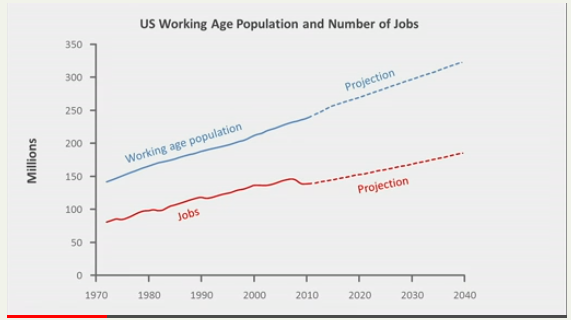 This is the projected number of people coming into the labor force contrasted with the number of projected jobs that will be available.

As you can see, for the forseeable future, these lines do not meet. In fact, they get futher apart.

And McAfee argues that he's being optimistic in predicting the number of available jobs in the future because he's basing his predictions on the past. There's a lot of evidence to suggest that, in this case, the past is not a good predictor of the future.   We're on the leading edge of the technology revolution and just beginning to feel the real impacts.

I also want to point you to some other ways that software and robots are taking over the intellectual tasks we have traditionally considered to be the exclusive domain of humans (from The Rise of Our Robot Overlords). These are important because I think they give you a flavor for the breadth and scope of these changes. We now have:

And this is just the beginning. As McAfee points out in his TEDTalk, imagine what we'll have when we're able to put together the technology of Siri with the technology of Watson. I don't think we can even begin to fathom the possibilities there.

What concerns me about all this is that I'm afraid we have "a failure of imagination," as Daniel Lemire describes it. It's hard for us to envision a future where machines do most of the work.

Right now, I think this is partially because we are currently picturing robots taking over our jobs, in a future reminiscent of The Jetsons. Since we don't see too many robots in our daily life, it's easy for us to say "Oh, technology isn't going to impact MY job." But I'm not so sure it's the robot you need to worry about at this juncture (although that's coming.) I think it's the increasingly sophisticated software that is everywhere, including on that smartphone in your pocket.

And here's something else we rarely discuss, but that is very real and one of the reasons I think we need to be concerned here. Aside from their obvious abilities to perform the tasks,  machines don't have the messy complications of humans, like personal lives and responsiblities or the need to sleep, eat and re-charge.

They don't call off sick or come in late because their kid had croup.

They don't argue with co-workers.

They aren't passive-aggressive, or jealous or lazy.

They don't ask for a raise.

In short, machines have that much touted "work ethic," that so many employers complain humans are lacking.

Think about it. If you were a business owner and could buy a machine for $30k that could easily learn new tasks and work for you 24/7 without complaint, what would you do? Hire a person to do that work? I don't think so.

Finally, we need to pay attention to the fact that there has been a decline in overall demand for cognitive skills that has been going on since 2000. From a recent paper, The Great Reversal in the Demand for Skill and Cognitive Tasks:

Many researchers have documented a strong, ongoing increase in the demand for skills in the decades leading up to 2000. In this paper, we document a decline in that demand in the years since 2000, even as the supply of high education workers continues to grow. We go on to show that, in response to this demand reversal, high-skilled workers have moved down the occupational ladder and have begun to perform jobs traditionally performed by lower-skilled workers. This de-skilling process, in turn, results in high-skilled workers pushing low-skilled workers even further down the occupational ladder and, to some degree, out of the labor force all together.

This is partially why a B.A. is now a ticket to a job in a coffee house. Education isn't the panacea we're all claiming that it is.

In my work over the years as a career coach, I've found that the majority of people do little to really manage their careers until they are hit by some kind of bomb. Sometimes it's being laid off or fired that creates the impetus for change. Sometimes it's when the person can't take it anymore.

The reason I'm harping on technology so much is because for most of us, I believe this is a ticking time bomb we are trying to ignore. Most of us want to keep our heads down and just keep working, hoping that we aren't going to be the ones displaced by a piece of software or some other form of automation.

This will be a mistake. And it will blow up in your face. You need to start thinking now about how to future-proof yourself as much as possible so that you're more prepared for this breaking wave of technology.

(Thanks to Matthew Price for these links)

So, Michelle, I cannot argue with your research data as mine confirms it. What I want to hear are solutions.