Courage, Vulnerability and Being Wholehearted at Work

One of the things I love about the social web is the serendipty of finding just the thing you need when you need it. Sometimes it's like magic and it's what keeps me coming back for more.

This morning, via a Facebook comment from Beth Kanter, I was led to Sahana Chattopadhyay's blog post on Trust, Tacit Knowledge and Social Business. One of the links Sahana referenced was this TEdTalk from Brene Brown.  It's one of those talks I had to watch a few times because it had so many relevant, important things to say about courage, vulnerability and connection. If you haven't seen it, take the next 20 minutes to watch it--some amazing insights from her 12 years of research.

So some highlights that I think connect to work and career . ..

First, Brene very clearly lays out that as human beings--and no matter what, we must start from the premise that we are humans--what gives our lives meaning and purpose is a sense of connection. Feeling connected to people around us is critical.  From a practical perspective, work must be done in teams and with other people, so connecting with them is clearly important. But on a deeper level, a feeling of connection helps keep us motivated and engaged in the work.  It's hard-wired into us. Without it, it's hard to continue, especially when times are tough.

Brene's research was about connection and she says that 6 weeks into it, she found that there was something in people that absolutely unraveled their efforts to connect. It turned out to be shame and fear. In fact, according to Brene's defintion, shame is most easily understood as a fear of disconnection--is there something about me that if other people see it will make me unworthy of connection? And underneath shame, she found, is a feeling of excruciating vulnerability, that in order for connection to happen, we have to allow ourselves to be seen. 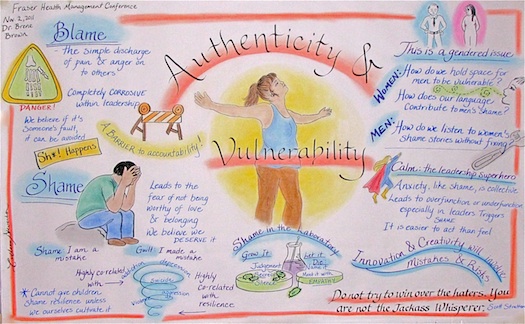 In looking at the people who felt  worthy of connection, she found that they were "whole-hearted." More importantly, they had a sense of courage. And here's the definition of courage that she worked with:

The root of the word courage is cor -- the Latin word for heart. In one of its earliest forms, the word courage had a very different definition than it does today. Courage originally meant to speak one's mind by telling all one's heart.

Over time, this definition has changed, and, today, courage is more synonymous with being heroic. Heroics are important and we certainly need heroes, but I think we've lost touch with the idea that speaking honestly and openly about who we are, about what we're feeling, and about our experiences (good and bad) is the definition of courage.

Heroics are often about putting our life on the line. Courage is about putting our vulnerability on the line. If we want to live and love with our whole hearts and engage in the world from a place of worthiness, our first step is practicing the courage it takes to own our stories and tell the truth about who we are. It doesn't get braver than that. Most importantly, they fully embraced vulnerability. They believed that what made them vulnerable made them beautiful.  They didn't see being vulnerable as comfortable, nor did they see it as being "excruciating." But they did see it as necessary. And they were willing to do things where there were no guarantees, no certainty in terms of how other people might react or behave.

So what does all of this have to do with work? Last week I wrote about the six workplace skills I think we need in the 21st century.  Self-awareness, the ability to engage in authentic conversations and empathic listening were on that list, all of which are tied to this issue of living whole-heartedly and with courage, of being willing to make ourselves vulnerable and to see our vulnerability as necessary, not something to be avoided.

I don't think it is easy to make ourselves vulnerable, especially at work. It feels like there are so many traps and hidden land mines. How will our vulnerabilities be used against us?

But the thing is, when we hide these things, when we retreat into perfectionism and/or shame, we lose the sense of connection that is fundamental to our ability to live effectively in the world. We guarantee our disconnection at a time when we need connection the most.

One of the things I'm exploring this year is how to be more vulnerable, how to show this kind of courage in my work, where  I let go of being the hero and focus on inviting connection by exposing those places where I feel vulnerable. When I've been able to do this, I've found tremendous growth, not only for myself, but for the people I work with. But it's a challenge. I can't lie.

So how do you feel about courage and vulnerability at work? What do you struggle with here? How can we do a better job of supporting each other in allowing for vulnerability in our careers?

My 7-Day Getting Unstuck Course starts January 30! If you're feeling stuck and need some help moving forward, you can sign up here.

Posted at 09:45 AM in Positive Professional Development | Permalink | Comments (7)

Wow, great find! I'm going to have to check it out. Happy New Year!

Thanks, Beth--Brene's work is really interesting and inspiring. I've also ordered a couple of her books, so I'll see what other treasures I find.

Happy New Year to you, too, and so glad to hear that you're manuscript is out the door!

I'm really enjoying your blog. This post particularly interests me. I created a presentation that I delivered at a symposium for teacher-librarians and then to the other teachers at my school. The presentation focused on my role at the school and my need for authenticity. I used excerpts from Brene Brown's TED talk, as well as Ken Robinson's. It was well-received, and I think it has clarified my role as teacher-librarian for those who were willing to listen.

Doing the presentation at my school certainly made me feel vulnerable, but it's something I needed to do to bring authenticity to my work.

Eileen, I love that idea and the fact that you put yourself out there in that way! I imagine that it was harder to do it with other teachers at your school than it was to do it at the symposium. One thing I'm finding is that in a strange way, it's easier to be vulnerable in front of relative strangers, than it is to put yourself out there with people you know. I think it's because the people you know have opinions and a picture of you that can cause them to be more resistant.

Thanks so much for sharing this!

Wow! This whole space has to be about the most authentic info, comments, and conversation that I have come across. I have so much admiration for folks who are willing to put themselves "out there". That is the definition of genuine.

Thanks, Margaret--glad you enjoyed the post! I do think that this issue is a big one for workforce development folks to really understand, since I believe it's one of the primary emotions we are dealing with in working with our client populations.

Good article! I've seen too many people in the workplace more interested in covering their own butt than anything else. In the end, it works against them as it creates barriers for them. These days jobs may only last a few years, but during that time, the people you work with are in a way your family, and it's important to have the ability to connect with them.