It's Not the Tool That's Boring. It's You. 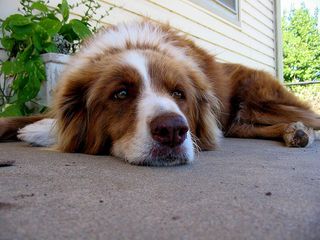 Great post from Sarah Horrigan on a training she did with University staff on using virtual learning environments (VLE's).  Apparently there were complaints prior to the session about VLEs being "boring," that Sarah decided to face head on, pointing out that it's not the VLE that's boring. It's what instructors do with it.

I asked, 'How many of you put your lecture PowerPoints in the VLE?'. Lots of hands. 'How many of you provide anything more than your lecture notes? Anyone put any additional activities in there?'... no hands. I asked them what that might feel like for their students. Was that an interesting or helpful place to be once you'd downloaded those PowerPoint? Were those PowerPoints really that helpful without anything else? Were they engaging? Have to say, there wasn't a great deal of nodding at this point!

I then got them to imagine a really great learning experience that they'd had while they were at school or university and what made it great. I then asked the group 'did anyone's great experience involve a great teacher?' Hands. 'A really great subject area?' A few more. 'A really great activity or experience?'. Lots of hands and nodding. 'Did anyone's great experience involve how brilliant the room was where the learning happened? How great the chair was they were sitting on? How great the desk was they were using? The pen? Anyone particularly excited by the pen they were using?'. No-one

That's the thing about technology and learning. People are quick to blame the tool, rather than looking first at their own behavior with it. It's PowerPoint that's the problem, rather than how it's used. Or they hate web conferencing because it's "dull." And don't even start with social media--blogs, social networks, Twitter et. al are just a "waste of time."

I understand why learners get sucked into thinking that the tools don't work, especially when they've been the victim of Death by Powerpoint or forced to endure an endless webinar. But for those of us designing the learning, that's just the lazy way out. I can blame PowerPoint or I can look at what Tom Kuhlmann and Cathy Moore do with it and rethink my strategies. I can say that social media is a "waste" or I can see the creative ways these tools are being used and modify my thinking accordingly.

That's not to say that we shouldn't ever complain about technology tools--some of them are clunky and not well-suited to the things that we want to do with them. (Blackboard comes to mind). But blaming a tool for being "boring?" That's just another way of saying "I don't want to be creative." As Sarah points out:

As adults we look at an empty cardboard box and see it as a storage device. Somewhere to put 'stuff'. As children we looked at that same cardboard box and saw a plane. A car. A train. An adventure waiting to happen. What happened to our own creativity? It seems like we get confronted by a 'virtual learning environment' and think that's enough. The learning will happen regardless of the effort we put into it. Wrong! So, so wrong! When eLearning works, it's an amazing, interesting, vibrant, evolving, engaging, rich space. When it's just a shell. A place to download PowerPoints... boy oh boy is it a sad bag.

I'm partially/largely with you on this.... but not totally.

Thing is, while you're right, some tools are just hard work to be interesting with and others are easier. Sure, people should design better powerpoint slides but it's an effort because PPT is designed badly... for example the default font is just plan inappropriate and the default template is boring.

Don't get me wrong, I use powerpoint (I even train people in using it - but let's not forget that there are better alternatives out there).

Simon, I agree 100% that the design of a tool can make it more or less interesting as a designer to work with. If it's clunky and difficult to use, then we're less likely to be engaged with it and want to use it for teaching. So if we want to complain that a tool lacks the right features and functionality for the kinds of learning we want to support, I get that. But when people say that the tool is "boring," I don't think that they're talking about the functionality as much as the content. In Sarah's example, the complaints were about VLEs being boring, but upon further probing, it was clear that they were boring because they weren't being used properly. What was boring was their content (PPT slides and little else), which is a failure of design on the part of teachers, not a failure on the part of the VLE. Not that I'm a big fan of a VLE--I think PLEs are more where we need to be. Still, I think that most of the time when people say a learning activity is boring, they are talking about the content and learning process, not the actual tool.

Great point - one that is LARGELY ignored and taken for granted.

But it is easier to be boring. This goes along with my 'mediocrity' rant. It is 'good enough' and everyone expects it but complains about it, but, because it is good enough, they tolerate it.

Yet those moments of learning come when we get out of that rut.

Thanks for bringing Sarah's post to my attention. I agree with you about the tools and their use. I think it's a shame when the baby is thrown out with the bath water. For example, 'traditional' Teachmeets do not allow the use of PowerPOint, in order to avert Death by PowerPoint. That, IMHO, is a mistake, because it doesn't address the real issues.

An old saying, "A poor craftsman blames his tools", reflects that idea. So nothing new here except, perhaps, the technology, and PP's not that new either.

I use PP for presentations, but the rules I use are:

1 Never look at the screen when addressing the learners.
2 Never read the text that the learners are trying to read for themselves.
3 Never dump the PP in the VLE on its own.

This last point shows how a trainer can abdicate his or her responsibility for follow up.

One technique I use is to edit my notes, quickly culling all that I covered, leaving all that I didn't manage to cover or had decided to leave out - for whatever reason. This may also include vids and possibly even PP slides I decided not to view during a session.

It doesn't take long to tidy this all up, and makes for a useful follow-up to drop into the VLE after the presentation. Feedback should be solicited immediately after the session, and this can give a better idea of what you might include in follow up material put in the VLE.

This is not only good practice, it is also good pedagogy.

I agree with Ken Allan. What bugs me the most about people presenting with ppt is that they will simply spend the majority of the time looking at and reading off the screen. What a great stimulating post.

I really agree with your assessment of both PPT and VLEs and that you can't blame the tool for a lack of creativity. It really bugs me when people just assume that PPT is a dumping ground for bullet points. One piece of advice I follow (which I think I got from Tom Kuhlmann) is to start a PPT presentation with the blank template and avoid the bullet ones. I don't know what Microsoft was thinking when they made more than half of their templates include bullet points. In that way, the tool guides us to think in text instead of pictures.

Many of the presentations I get from my clients are just slide after slide of bullet points. So, I study the content and determine how to depict the key points more visually. The visuals are much more effective than the bullet points because they show relationships that the bullets hide.

Totally agree, Michelle.
I'm trying to remember that last time I heard someone blame a boring book on the quality of the printing press.
The quality of content has nothing to do with the technology used to create and publish it. (Not that quality tools aren't important too!)

I agree, but also think that Technology is naturally seductive to explorers. It's a bit like buying really expensive mountain gear for a simple bushwalk, sometimes the best technology for a task is a simple one. If you want to get a point across, choose the most appropriate tools within your stable.