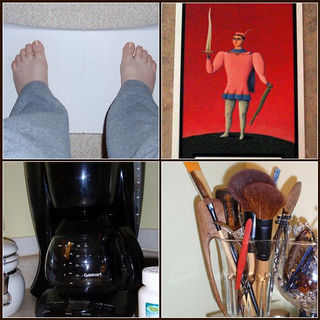 After my little productivity crisis of the past few months, I've been working on jiggering with my daily routine. I'm especially interested in finding that balance between activities that support the spark of creativity while still making sure that I get things done. In this spirit, I was quite excited to find the Daily Routines blog, which looks at how "writers, artists and other interesting people organize their days."

What's interesting first off is how many of these people have a routine. On some level, you'd think that creative types might just let it all flow, but clearly most of them see a routine as a sort of ritual that's necessary to enter into the creative stream. Here's how Gerard Richter organizes his day, for example:

He sticks to a strict routine, waking at 6:15 every morning. He makes breakfast for his family, takes Ella to school at 7:20 and is in the studio by 8. At 1 o'clock, he crosses the garden from the studio back to the house. The grass in the garden is uncut. Richter proudly points this out, to show that even it is a matter of his choosing, not by chance. At 1 o'clock, he eats lunch in the dining room, alone. A housekeeper lays out the same meal for him each day: yogurt, tomatoes, bread, olive oil and chamomile tea.

After lunch, Richter returns to his studio to work into the evening. ''I have always been structured,'' he explains. ''What has changed is the proportions. Now it is eight hours of paperwork and one of painting.'' He claims to waste time -- on the house, the garden -- although this is hard to believe. ''I go to the studio every day, but I don't paint every day. I love playing with my architectural models. I love making plans. I could spend my life arranging things. Weeks go by, and I don't paint until finally I can't stand it any longer. I get fed up. I almost don't want to talk about it, because I don't want to become self-conscious about it, but perhaps I create these little crises as a kind of a secret strategy to push myself. It is a danger to wait around for an idea to occur to you. You have to find the idea.'' As he talks, I notice a single drop of paint on the floor beneath one of his abstract pictures, the only thing out of place in the studio.

And this is the routine of an "abstract" painter!

Early rising seems to be a particular theme among many creatives.  Richter is up at 6:15 a.m.  and John Grisham (when he was first writing), was up by 5 a.m. Emily Dickinson rose at 6 a.m. and Charles Darwin by 7 a.m.  Flaubert, on the other hand slept until 10 a.m., preferring to do his work at night.

The issue here, of course, is that all seem tuned in to their particular daily rhythms, knowing when they do their best thinking and when they don't. Gunter Grass says, for example, that he never writes at night because "it comes too easily."

Naps and walks (or some form of physical activity) are other common threads, providing that down-time for creativity to gestate. Walks in particular are also a way for these creatives to work through problems and get input from the outside world that feeds their creativity. From the post on musician Erik Satie:

Roger Shattuck, in conversations with John Cage in 1982, put forward the interesting theory that "the source of Satie's sense of musical beat--the possibility of variation within repetition, the effect of boredom on the organism--may be this endless walking back and forth across the same landscape day after day . . . the total observation of a very limited and narrow environment." During his walks, Satie was also observed stopping to jot down ideas by the light of the street lamps he passed.

Food seems to be another big theme, especially for those who were working in the 19th and early 20th centuries. I'm not sure if this is a sign of those times or an actual requirement for their creativity. I tend to think the former, since creatives mentioned from more recent years seem more in tune with food as fuel, rather than food as ritual.

I also notice that most don't work an 8-hour day, not as a matter of routine, anyway. It's virtually impossible, I think, unless you're in one of those creative firestorms where you're pounding stuff out. But I've found that work like that is usually followed by a mental, emotional and physical collapse.

Amid all this general structure, there are some wonderful tidbits of activity that occur, like the one observed by artist Chris Ofili: He arrives in his studio at 9 or 10 in the morning, he explained. He sets aside a corner for watercolors and drawings "away from center stage," meaning where he paints his big, collaged oil paintings. "I consider that corner of the studio to be my comfort zone," he said. First, he tears a large sheet of paper, always the same size, into eight pieces, all about 6 by 9 inches. Then he loosens up with some pencil marks, "nothing statements, which have no function."

"They're not a guide," he went on, they're just a way to say something and nothing with a physical mark that is nothing except a start."

I also love this description of how Saul Bellow worked:

Most mornings we linger. Work will wait. We tour the "giardino" and see which flowers have appeared. This June there is a white anemone of which Saul is enormously proud (there's never been another before or since--the moles seem to get at the bulbs). The giant red-orange poppies are budding, the peonies will flower this year in time for Saul's birthday, and there's one early bright purple cosmos blossom. We admire a fat sassy snake curling among the wild columbines. "The whole world is an ice cream cone to him," Saul laughs as he disappears into his studio.

Everything must be taken up nimbly, easily, or not at all. You can't read Saul without being aware of the laughter running beneath every word.

I will say, though, that some people had some rather extreme needs for priming the creative pump. From The New Yorker on Gertrude Stein:

Miss Stein has an outsize bathtub that was especially made for her. A staircase had to be taken out to install it. After her bath she puts on a huge wool bathrobe and writes for a while, but she prefers to write outdoors, after she gets dressed. Especially in the Ain country, because there are rocks and cows there. Miss Stein likes to look at rocks and cows in the intervals of her writing. The two ladies drive around in their Ford till they come to a good spot. Then Miss Stein gets out and sits on a campstool with pencil and pad, and Miss Toklas fearlessly switches a cow into her line of vision. If the cow doesn't seem to fit in with Miss Stein's mood, the ladies get into the car and drive on to another cow. When the great lady has an inspiration, she writes quickly, for about fifteen minutes. But often she just sits there, looking at cows and not turning a wheel.

Cows and rocks aside, the common thread running underneath all of this is that each person has this particular NEED to do the work of creativity. The rituals and routines are there to facilitate a process that for each of them must happen. Not that the routine doesn't become well . . . routine, at least at times. But ultimately, each of them is using routine as a way to create that fertile ground for creativity to flourish. And it's not about productivity. It's about finding the discipline to make the best use of a creative spark that may at heart be undisciplined. It's a tension of opposites that I find really fascinating.

Interesting. Another common theme was lack of children, mortgages, and working for others. I have to wonder if there's a different variable here (other than routine). I'll go ask my housekeeper...oh wait, that would be me.

I have to say that my true creativeness has always been between 5-9am, I used to relish coming into the office early, having sat on the train or in the car, thinking about what tasks I had or the day. Since working from home, and having a 6mo to contend with I'm lucky if I get solid thinking time at that time of day. I'm trying to push my brain to be more creative at night, after 6pm, after my daughter has gone down to bed... alas even though its 5am somewhere my body can't teleport to that time zone!

Seeing how so many different creative folks organized their day was facinating. The lesson I learned was that creativity needs structure, which to me is counter-intuitive.

I love that an artist has to have a different creative outlet than their work. That painting has become "work" to them. I feel that my art (no matter how bad it is) helps me to focus on the other parts of my day. The nice thing about creating something is that you have to clear your mind of everything else. That only the here and now matters. It is the best stress reliever that exists!

Janet--totally agreed that creativity also seems to thrive when you have an absence of responsibilities. I suspect that children and taking care of the home have been a big reason why we have more "successful" (or at least well-known) male creatives than females.

Emma--I think it's really hard to do much of anything other than survive when you have a baby and a job. I know that when my kids were small, the last thing I was doing was thinking about getting up really early to write or do anything creative. All I wanted at that point was sleep! :-)

Leslie--that lesson about structure was a little counter-intuitive for me, too. But then the more I thought about it, the more sense it made. You just can't get anything actually done if you don't have some kind of structure to your days.

Bethany--It's interesting that focusing on your art then helps you focus on other parts of your day. I just read an essay about writing where the author said that he gets a "high" from his creative process that he needs to really function. I can see that and how addictive that would be.

Late posting - catching up on my blog reading.

It's interesting that we often think of structuring our day in terms of time rather than energy. Recently I've been experimenting with a task management system a friend introduced me. It's been amazing, esp. as I can structure my day as I please.

The key is working on tasks that have energy around them for as long or as short as I want. I end up working in bits and pieces. On home and work stuff (2 lists). And creativity and productivity has soared.

The hardest thing is allowing the list and the system around it to be your master and not getting distracted too much (by google reader for example :)

Thanks for the insights into creative people's work-life habits.

The good thing about your information is that it is explicit enough for students to grasp. Thanks for your efforts in spreading academic knowledge.