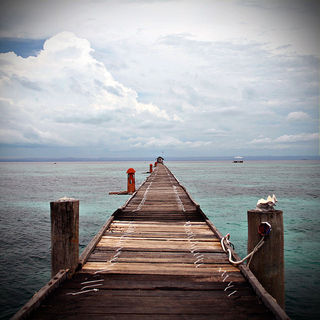 When memories exceed dreams, the end is near. The hallmark of a truly successful organization is the willingness to abandon what made it successful and start fresh.

I think this is true for individuals, too.

Have your memories exceeded your dreams? What do you need to abandon? How could you start fresh?

Well as you get older, you either have to have a poor memory or dream a lot. The problems with getting more experience with years are the memories. If you let them cloud the vision, you're done.

It's being selective with which memory that's important. Memories can be like demons on the shoulder. To overcome the demon, first you have to recognise that it's there.

Since the demons are imaginary, probably based on memory, they can be made to disappear. The real trouble begins when there are several to get rid of. It takes persistence to get rid of them all.

Some of the worlds greatest actors had demons on their shoulders. Richard Burton was such an actor. Laurence Olivier was another. Burton suffered severe stage-fright, not so much when he was younger, but as he became more experienced, it took great fortitude to swipe the demons.

One stops dreaming when reality conflicts with the imagination.

For many, learning something new is like a dream. The adage about teaching old dogs new tricks rings true if the old dog won't dream anymore.

It's what I recognise makes the biggest distinction between young people and those who are much older. The older people have it all. They have experience. They are the experts. They have control. But unless they have the 'can-do', they will be left behind by someone younger.

A good helping of Zen does the trick.

For me, the key is being open to new data (or being able to see old data in new, unflinching ways). If you are always looking for the facts, evolving trends, etc., you might have a better chance! I think memories and experience are important--they should provide grounding and context--but they should not be allowed to blind you to new ideas and new ways to solve problems. I will concede, however, that this is hard to do. Inertia is a very, very powerful beast.

One thing I recently abandoned was my music collection. I decided to start fresh, and rebuild with only the things I listen to (before, I had a lot of unlistened to songs that were digitally going to waste).

Another thing I've recently abandoned was my RSS feeds. I deleted them all, and added only the ones I could remember (the theory here is that only the necessary ones would be added back), like The Bamboo Project :)

What about You? I hope you don't think you can get away with asking this question without answering it yourself for your readers! ;)

Ken, your "memories as demons" comment really struck a chord with me. That's one of my greatest challenges. Not to get all psychological, but certainly for me there are memories that have great persistence for me, with negative effect.

Which takes me to Koichi's comment asking what memories I'm going to abandon. I'm working on abandoning those that have negative consequences for how I think about my future--like the ones that say "you will fail" or "you can't do that." I also want to abandon the memories that say I have to do things a certain way (perfectionism and control run rampant in me!) because while perfectionism and control can lead to excellence, they can also lead to some serious stagnation.