9 Lessons I Learned From Running My First Webinar 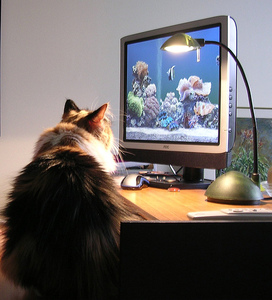 On Tuesday, I ran my first webinar--an hour-long session on time management. Not my topic of choice, but this was a long-time client so sometimes you do what you have to do.

After the webinar experience I liveblogged a few months ago, the one thing I KNEW couldn't happen with this thing was death by Powerpoint. You might be able to get away with a bad PPT presentation if you're an engaging speaker in a face-to-face situation, but not when the PowerPoint is all they see. There's a level of pressure here to make the visuals engaging that really forces you to step up your game.

Compounding my problem is that the audience I was presenting to is not, shall we say, the most technologically savvy crew, so I was also worried about the challenges of getting people online and participating.

Since this was my first time, I wanted to capture what I learned from the experience. I figured I should share, especially since others were so generous with their advice back when I asked for it in October.

1. The time you usually take to prepare for a training session? Take that and quadruple it--at least. Part of my issue here may have been that I was doing a webinar on a topic that isn't second nature to me, so a larger than usual amount of prep time was devoted to figuring out content issues. But beyond that, the killer was thinking through how to make the presentation engaging when all people are doing is listening to my voice on the phone and watching me advance through slides. I cannot begin to communicate the agonizing over photos and slide transitions, etc. that I went through. Unbelievably time-consuming. Anyone who tells you that preparing for a webinar takes less time is either lying or isn't doing a very good job.

2. Err on the side of more slides. One thing I figured out relatively early on (thank God) was that I needed to be OK with having close to 100 slides. I've been moving in that direction anyway, thanks to Beyond Bullet Points, but I found this to be particularly important in this case because it gave a sense of movement and progress through the presentation that's necessary when there are no humans in front of you.

3. Write a script. My training style is generally facilitative and interactive--I've never been comfortable with the whole "sage on the stage" thing. One big downside of a webinar for 75 people, though, is that facilitation just isn't possible. You're forced into the position of "presenting"--the sort of digital equivalent of standing behind the podium and giving a speech. Because there was little interaction and no graceful way for me to jump around if I had to the way you can in face-to-face, I ended up writing a script for each slide--more like doing a screencast, really.

4. Practice, practice, practice. We used GotoWebinar, which for us worked pretty well, although we had a couple of glitches along the way. I wanted to be sure that I knew how to do everything, so I did a few practice sessions with some colleagues, including running through the two polls I included, so I could get comfortable with how everything worked. This wasn't just about flipping through slides. There was audience participation to monitor, questions to respond to (we used chat) and polls to conduct and review. It was a lot of stuff and I needed a lot of practice.

5. Be prepared for lots of technology confusion. When we sent out the invitations, we thought that we'd been clear about how to sign up for the webinar and made things pretty easy. We even had some less tech savvy people follow the instructions to make sure that we weren't being too complicated. Even so, we still had calls and emails from people who couldn't figure it out, so tech support was definitely an issue.

6. See Number 5. Yes, we had additional technology confusion on the day of the webinar--most notably, people not realizing that they needed to call for the audio and be online for the visual stuff, even though we emailed about this several times. But I had my own issues that I need to confess as well. Like forgetting to hit *1 to start the conference call. And forgetting to hide the poll results so that the audience could see the next slides. And advancing past the last slide so that people could be greeted with "end of slide show" and a black screen. You know. Stuff like that.

7. You need at least 2 people to answer the tech questions, neither of them being you, especially at the beginning. We thought that with the excellent (in our opinion) instructions we sent out about the call, we'd have minimal technology questions during the call. We had a couple of people standing by to answer them, but they were on the phone and had people on hold for 20 minutes into the webinar, so that wasn't enough. The biggest question was "Why can't I hear audio"? so we decided that for the next time, we're going to do a quick video demonstrating how you have to log into the webinar AND call the conference call number. Hopefully that will help alleviate some of the confusion. We'll also have a few more people to help out in the beginning.

8. Deviate from the script--and don't be afraid to make a few jokes. I had my script that I'd rehearsed with several times, but in the end, I used it as more of a guide, rather than as a strict script. I got more conversational and even made a few jokes, which is frankly kind of weird since it's like you're talking to yourself. But apparently they liked it, so I'm thinking that it worked.

9. Answering chat questions through audio is kind of strange. I broke a few times for questions that we encouraged people to submit though chat. I had to scroll through the questions to see what I had, while also not leaving a lot of dead air. So I'm scrolling, reading, chatting and trying to figure out the answers to the questions all at the same time. Not terribly difficult, but somehow I felt like a radio announcer on a call-in show. Strange.

Overall, the webinar went well. I got a lot of excellent feedback about the quality and the pace, so that was good. I think it helped that expectations were minimal--most hadn't done a webinar before and those who had had experienced government-run versions, which I don't need to tell you are the deadliest. I have to do another one on February 6, so I'm hoping it runs as smoothly. Of course, I haven't even started putting it together yet, so I guess I know what I'll be obsessing about for the next few weeks.

Michele, thanks for this helpful summary. It came just in time--I'm preparing my first webinar.

Great summary! My only comment is that you had 100 slides in one hour! WOW!- I work with presenters and strongly recommend that they have less than 30 for a one hour program. We do use polling and I try to encourage them to use annotation tools as well to get activity going. I will have to rethink my recommendation......

Michelle:
Thanks as always, for great tips / thoughts. As for your #1, I am sitting at my computer, shouting YES! out loud at the cat. We are teaching our first distance learning course at the university masters level, and the time it takes for EVERYTHING is brutal. Prep time, ongoing feedback time - all of it. I am so used to teaching in a live setting, and truly everything I would just know instinctively to say or do now must be in writing. So thank you for making me feel like it's not just me! Hildy

Michelle: You have some really good thoughts. Thanks for sharing!

Using images! My experience has been you got to have them...they are more powerful than bulleted items and allow you to speak a bit more freely on the slide as well as invite the learners to state rhetorically, "I wonder what this is about."

Hi Everyone--thanks for the comments!

Nancy, regarding the number of slides--the feedback I got was that people liked the slides to move more quickly because that was all they had to look at and it made them feel like things were moving. In "real life" you'd see a person moving in front of you, but you don't get that with a webinar, so I guess it helped somehow.

And Walter--I think you're absolutely right about the images. This is something I've been working on in my PPTs a lot lately--using lots of photos and minimal words on the site. It has helped improve the quality tremendously and people really respond more positively. I have to say that it's definitely more time-consuming, though, trying to find just the right images.

Hi Michelle! Glad to hear that your webinar experience went well, and that Beyond Bullet Points is helping out. Some other practical tips that might help:

- When you're new to presenting via webinar, do a dress rehearsal using the webinar tool with some friends/colleagues who are remotely located. It's easy to get flustered with the technology, and the only way around that is to practice with them.
- The visuals are indeed critical to keep things moving - that's one area where BBP helps because the visual approach keeps things moving at a pace of at least one image per minute. In addition, consider your options beyond PowerPoint. Besides the polls you mentioned, switch to another document or application at appropriate times. One of the most engaging visual experiences is if you draw on a PowerPoint slide or document using a Tablet PC or a mouse.
- Equally important to visuals is your voice. It was interesting that you said you felt like you were on a radio call-in show, because I would say that the skillset you need for webinars borrows more from radio broadcasting than public speaking. Like on a radio, you would generally speak a bit more slowly, be careful not to say "uh hum" when someone is speaking, and as you point out, keep the whole event verbally flowing without dead air. I recently started seeing a vocal coach to lend me a hand, and the things she recommends are to always keep the screen level with your eyes so your head is not down, which would send your voice down. Some presenters put their computer monitors on a tall table and stand while they present at the webinar.
I'll be presenting a free webinar about presenting webinars at Adobe Connect on Feb. 14 - I don't have the registration details yet, but if you drop a line through the Contact form at www.beyondbulletpoints.com, I'll be glad to pass them on when I have them.

Hi Michele,
Thanks for a great summary. I also found that it takes much longer to prepare for a webinar than I thought it would, even when I'm teaching on a topic I know well, because you need more slides and those slides require interesting visuals. I hope that once I build a good personal library of images that represent all the different concepts that I discuss, the process won't take so long. I also appreciate Cliff's point about using the online pen to draw on the slides. I've been pretty timid about that to date, but I'm going to really try to incorporate that into my upcoming webinars.