Home For Organizations Speedy Startup Entrepreneurial Programs Leadership Programs Projects & Presentations Contact
We Need Your Help to Move up on the America's Giving Challenge Leader Board!
Getting Productive in 2008, Starting with GTD

The Bamboo Project Readers' Guide to Getting Back Your Creative Mojo 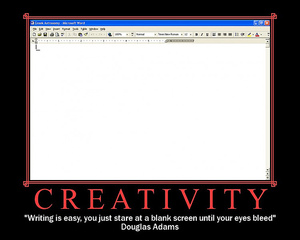 Last week I asked for your help in getting back my creative mojo so that we could share your tips with others who suffer from the same periodic bouts of brain sludge--which is to say, all of us. As usual, you did NOT let me down, providing me with a veritable treasure trove of ideas that have been extremely helpful.

1. Take a walk, preferably in nature.
Without question, the number one piece of advice was to get out, away from the computer, away from the desk, and into nature. Shari Voigt said:

When I'm feeling uninspired, I walk away from the computer. I can't remember where I read this, but putting your body in motion aides your creativity. I stick a small notebook in my pocket and walk the dog in a nearby woods. More often than not, inspiration strikes AND we've got our exercise in for the day!

The simplest solution for me is to go for a walk - gets you moving and you'll be feeding your naturalistic intelligence - might just give you an idea or two... It's normally best though not to go out looking for ideas and inspiration - resistance tends to kick in when you do.

I definitely agree with that last point--the more you push, the more resistance you feel, which leads to the next bit of advice.

2.  Accept that the fallow times are a normal part of creativity.
Another thing that you told me was to recognize and accept that the "down" times are part of the creative process, something to accept, not to fight.  Christine Martell said:

Admit it and own it is important for me, like you have done here. That can be really hard for me, since I help others get through this stuff, and am a 'professional' creative. Yea, right, we're the same as anyone else. I find these fallow times often are followed by times of high output, so I just have to have the faith to wait it out.

And Lisa Gates suggested that in fact the way out of the fallow period might be through embracing it:

This awareness did not come about consciously for me. It happened in retrospect. In a particularly fallow period, I would stare at my computer, get grumbly and pissy, exercise little, see nobody, and just disappear. In retrospect, I realized my expectations were specific and my standards were miserably high. What I did to bring myself through it was to allow my pen to produce drivel. Barely sentences. Incomplete thoughts, judgments, evaluations, erratic handwriting, scratchy doodles. I allowed myself to sit idle and not move. Unconscious or not, what I learned is that by saying yes to the drivel and nothingness I had the freedom to transform. My higher self somehow knew I would not be fallow forever.

3. Let go of the idea that you have to be "productive."
One problem that I think a lot of us have is this idea that we should somehow always being building toward  some successful product. It's hard to see creativity as a process that isn't always measured by achieving a big goal. As May said:

In a horoscope I read once it said that there's no need to be constantly measuring a project or goal for success, and that's helped me a lot. Letting myself feel it's okay to not be constantly "on" in my life or working towards all my big goals in some obvious way has been a big part of being okay with being uninspired for me.

One thing to watch out for is what you're telling yourself - is your language full of "shoulds" - should be writing, should be creative, should have ideas about what to do... They can be enough to block you.

Completely true and May had some good advice for dealing with that:

I also try to praise myself for whatever I might have accomplished in the recent past instead of focusing on my irritation over not creating something new.

So part of letting go is letting go of having a goal, at least for awhile. Easier said than done if you feel like so much of your creative energy is tied up in producing content for people who expect you to be able to keep doing it.  But usually you're your own worst task master anyway--as Christine said, she's her own meanest boss! 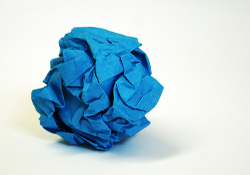 Habit can be an incredible impediment to creativity, especially when we start living our lives unconsciously. My habits often have to do with getting into a rut of sitting at my computer, reading and writing, without a lot of other kinds of experiences coming through the filter. But that can stifle the flow.

I recharge the batteries with a good book, a walk, a long drive, music or a movie. No this isn't avoiding or wasting time, it's feeding the imagination. A long bath with candle and soft music isn't bad either, whether or not you are feeling devoid of ideas!

I flip through my photo file for inspiration. I use the time to learn new software, which is another part of my brain. I make long lists. Even get fancy with multiple colors and such. When I'm really stuck, I get out the post-its. Lots of sizes and colors for when I'm really having trouble.

I hate shopping, but I do find walking around some kind of shopping place can snap me out of creative lulls. Something about seeing things I don't in my normal day can spark an association. And of course, I can always start cleaning my house--- I will do almost anything to get out of that. Suddenly all sorts of other ideas of things to do can emerge :)

Part of what helped me this time was to walk away from the words. That's where I'm usually producing and when things start to get "stuck" what can release things for me is to go to the visual. So I actually did a lot of drawing and collage in my journal this past week to try to get away from my verbal side. I also listened to instrumental music--classical and New Age--to fill my brain with something other than the incessant chatter that is often a blocker for me.

5. Prepare Ahead of Time
Beth Kanter, sensitive to my plight, actually went and wrote an entire post about it! She has some excellent advice there (so go read it), but one of her best tips was to "Tivo your creativity" by taking advantage of your creative highs to stockpile for the inevitable lows. She has some great ideas for doing this, including writing a ton of blog posts that you can then save for later and going back to previous posts to seek out potential themes and ideas, both of which have helped me at various times.

Besides the great advice I received here, what I also took away from this was how helpful it can be to share with others that you're going through a dry spell. Not just to get their ideas for how to deal with it, but because the act of saying "I'm just not feeling it right now," can be incredibly cathartic. Somehow it gives you "permission" to be OK with not being on top of your game. It also helps you feel less alone, as other people clearly experience the same down times.

One thing I thought was interesting in this exercise was the fact that I got a ton of comments on my original post--and all of them were from women, despite the fact that I have a lot of male readers. I don't know if that's significant or not, but it makes me wonder why. Is it that women are more willing to offer advice? Are we more comfortable with the dry periods? I really don't know. It's just a question hanging out there for me.

Thanks to everyone who contributed your ideas and suggestions. You were incredibly generous and thoughtful and I think gave everyone some great tips for dealing with the down times. Thank you!

Photos via Alun Salt and Kazze

You have such impeccable blogging integrity, Michele. Thank you for this recap. Hmmm, do you see a group writing project gestating?

Michele, this is a fantastic round up, thank you, and a powerful reminder of what we can do, together, through blogging.

PS Taken your lead and switched my captcha off - my readers are v. happy!

Thanks for writing this Michele! You inspire me!

Hi, Michele. I really enjoy reading your posts. I like both its content and tone and am wondering whether your blog is equally commented upon by men and women or predominantly by women. Got an idea? Nadia