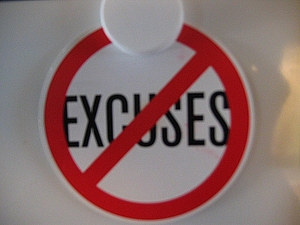 Katya Andresen has a GREAT post on operating your organization with no excuses. Apparently she recently did a presentation on tweaking your marketing messages, where she was told by her audience that her suggestions weren't possible because:

Katya goes on to take each of these "constraints" and turn them into possibilities, urging us to think in terms of what we CAN do, not what we can't.

Katya's experience is something I get all the time, particularly when it comes to suggesting that staff change how they are currently operating. It seems that it's easier to spend time making excuses for why things can't change, rather than trying to figure out how they can change.

I suspect that this goes back to how scarcity thinking seems to rule in most organizations. Even though there's a lot of evidence to suggest that creativity actually does better when constraints exist, most people persist in the belief that constraints hold us back, rather than giving us a framework within which we can find solutions to our problems.

I'm doing a lot of thinking lately about leadership in organizations and Katya's post underscores the point that leadership is about making solutions, not excuses.  It's about recognizing where there may be some constraints and then using those constraints to propel you forward.

One of my favorite leadership books of all time, Good to Great, talks about how the great companies use The Stockdale Paradox:


Many companies have failed because they are unwilling to confront the brutal facts, but I suspect that in the nonprofit sector, the bigger problem is going beyond the brutal facts to create something different. There seems to be a pervasive mindset that a lack of resources means an inability to change or have impact. From what I've observed, however, it's often not the lack of resources that is the problem. It is how the resources are being allocated and used that is the issue. In Katya's post, for example, she points out that instead of thinking "I don't have enough time to tweak my marketing messages," the answer should be "My time is better spent fixing a bad message rather than sending out more bad messages."  It isn't about the lack of time as much as how the time is being used.

In so many cases, it seems that organizations just sort of give up and give in to their excuses. This, to me, is one of the most profound failures of leadership. It's impossible to have any kind of vision if your sight is clouded by all that you can't do. Vision, by it's nature, is about seeing the possibilities, not the limitations. It's about seeing what CAN happen, not what isn't working. Excuses don't create change. They maintain the status quo, something that presumably many organizations are trying to change.

It also seems like this kind of "excuses only" leadership could become one of the primary reasons that  many nonprofits may find themselves becoming irrelevant. In a recent post, Seth Godin talks about the death of direct mail and how he he's worried about the ability of the largest nonprofits to change:

I'll start with the bad news: I despair for most of the top 50 non-profits in the US. These are the big guys, and they're stuck. Unlike the Fortune 100, not known for being cutting edge in themselves, the top charities rarely change... if you're big, you're used to being big and you expect to stay big. That means that generation after generation of staff has been hired to keep doing what's working. Big risks and crazy schemes are certainly frowned upon.

What I see here is the potential for more "excuses only" leadership--"We can't change because we've already invested so much into doing what we've been doing" (a constraint), rather than "The rules of the game are changing, so how can we keep up?" (a possibility).

What Katya's post opens up for me is a call to "No Excuses Leadership" that individuals and organizations must learn to heed. If they don't, then they'll get left behind.

Many people seem to be conditioned to raise objections instead of offer possible solutions. I also often see behavior that mixes divergent and convergent thinking in ways that cancel out creativity. So instead of asking how can I ______ and staying with it until you have a long list of possibilities, you hear well I could ____ BUT it won't work because ______. If we can delay the judgment of the ideas until we have more on the table, we raise the possibility of several of those ideas combining to create something that really can work. Looking for Yes AND, not Yes BUT really helps me move beyond limitations in my thinking.

Thanks for the shout-out and even better, the perceptive insights you added to the no-excuses theme. Very inspiring stuff!