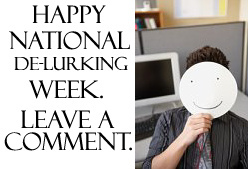 Yesterday's post on the six reasons people aren't commenting on your blog was one of those things that takes you by surprise. One second I'm dashing off a quick post between calls and the next I'm watching my stats and comments go off the charts after Chris Brogan tweets about it. Of course the real beauty is that with all those comments, I got some great info and questions from readers for a follow-up post.

Blog Comments or Email?
Anji Bee pointed out that one of the things she's noticed is that many of her readers will email her rather than leaving something in comments. She suggests that this might be the nature of her readership--as a musician people may want more of a one-on-one with her as an artist. It could also be that people are used to email as the way to connect with other people online and that they don't see comments as the way to do that. As a blogger, I'd be on the fence in terms of whether or not I saw this as a problem. If I was hearing from people, even if it was just through email, I might be OK with that. But if you're trying to create a sense of community among your readers, then obviously the email route won't work.

Responding to Comments on Your Blog and Commenting on Other Blogs
Joanna Young and Sue Waters suggested that how we respond to comments on our own blogs and the commenting we do on other blogs can make a big difference in the quality and quantity of comments we receive. Joanna wrote:

". . . you were asking for more, I'd add two, (1) how do you respond to comments on your site, is it encouraging and welcoming, this is part the tone and environment that you describe (2) how much do you invest in commenting elsewhere - all my early doors commenters came from blogs that I'd visited and joined in the conversation, with people who were generous enough to come back and do the same with me"

And Sue followed up with:

"A lot of bloggers fail to realise that they need to comment back to people who comment on their posts. If a person makes an effort to write a comment the minimum you should be doing is writing a comment in response. However there are a lot of bloggers who never do this because they are either new and don't realise the importance or have forgotten that the conversation and acknowledging the conversation is really important. Eventually I will stop commenting on a person's posts if they don't make the effort. And it is important to remember this is not just for that commenter but for all commenter's because if they notice that you do not respond back they are less likely to. PS Michele you are so much better at fast response to comments than me.

The second point Joanna makes about commenting to other people's posts is equally important. I spend a lot of time making conversation on other people's posts because I value the conversation and as mentioned before I use co-mment (http://co.mments.com/) so I can quickly respond back to further comments if I choose to. I have had some amazing conversations with other commenters who are commenting a person's post because we have used it as a mechanism to catch up with each other (off course we thank the blogger for the opportunity."

"I agree that one real important piece is to acknowledge people who have commented on your blog. Imagine standing next to someone and saying "hi, how are you?" and getting absolutely no response as if you don't exist."

A Guide to Blog Commenting
In yesterday's post I suggested that one thing you need to do, especially if you're writing for a non-tech savvy audience, was create a guide to commenting on your blog. Sarah Stewart took that advice to heart and immediately posted her own. It's a nice example of how to do this and I think gets across Sarah's warm personality very well. If this is something you're thinking about for your own blog, Sarah's example is definitely worth a read.

Sounding Like a Person & Writing from Your Heart
Several people agreed that there's a need to write from your heart and to connect with people on more of a person-to-person, authentic level if you want to invite conversation. As Danielle B said:

I personally have to make sure that my posts come from my heart and not from my always analytical head. Which is why #1 and #3 are areas I keep a look out for when I re-read a post before I hit 'publish'. When I did the post on teaching our families to hug us, I had several quotes on how scientific research proves the positive benefits of hugging. I hit publish...had it up for five minutes...edited out the 'press release' stuff..and re-published. I think this made all the difference in the number of comments. However, as a side note, there was one person who had read the post in that five minutes with the research quotes and emailed me wanting them (grin).

". . . how would you turn these into measurable things? Could / should you measure tone or other aspects that are behind these more open ended questions?"

Great question that I'm not sure I have the answer to. I told Jered via email that I would tend to measure whether or not my strategy to sound approachable was working based on whether or not I was receiving comments, since that was the outcome I was looking for. But that's not a very direct measure and may not be the best way to look at it. I might also do a poll to get people's reactions to my approach or have someone who doesn't read my blog take a look and give me their impressions. Any other thoughts on this one? Both Jered and I would love some feedback on this issue.

Thanks again to all who took the time to comment yesterday--as Laura pointed out, writing a post about commenting may be one of the best ways to get comments. :-) And, of course, thanks to Chris for the tweet that kicked everything off.

If you have additional thoughts on how to increase comments on a blog or can help answer Jered's question about measuring the success of your strategies, leave a comment!

A great round up Michele, thanks.

I think my answer to Jered would be the same as yours, I'd measure the number (and quality) of comments on my blog, since that was the outcome I was hoping for.

I'm not sure they're measurements as such but other things to watch might be: conversational language (simple things like contractions); including some questions that readers can respond to (though tagging 'what do you think?' onto a post that sounds like a press ain't going to work)

Asking for a second opinion might also be a good idea as you suggest (maybe just ask your readers!)

PS A small Typepad issue - one of my readers mentioned (on StumbleUpon) that it was a shame you had to be a Typepad user to comment on my blog. This isn't the case, it's just the way it's worded. I'm reminded of it seeing it here in your comments too. When I looked at the wording through a reader's eyes I realised it's ambiguous, it could be read as "you're invited to comment if you're a TypeKey or TypePad account". I've disabled that option on mine now to avoid the possibility of doubt.

Michele: This post and the previous one have really got me thinking about how better to encourage comments in my postings. I think my posts often feel "complete" and don't open up the conversation, as you suggested, especially the posts on our organizational blog. Because it's an organizational blog, I think we might also suffer from the press release syndrome, almost without realizing it -- we have our professional voice on. But we have to keep in the front of our minds that one of our goals is to encourage conversation and build community as we write, and perhaps that means not always acting so "professional". Anyway, thanks for the food for thought!

Thanks for this, Michele. I'll let you know if my post about commenting makes any difference. Meanwhile,the discussion has led to other questions for me including what I actually want my blog to be about. So your post yesterday probably had effects you hadn't even thought about. cheers Sarah

Hi Everyone--thanks again for your comments on this. Obviously this is an area where we all want to make things better!

Joanna--thanks for the info on Typepad--I'm going to check how I have mine set up because I didn't think I had that option on, but maybe I do. I also really liked your post on why you like comments. I think that was excellent!

And Shannon--I think you bring up a really excellent point about that desire to sound "professional" sometimes making you sound "institutional." I think it's even harder for organizations than it is for individuals, although I know it's something I struggle with. But even at the organizational level we still relate to individual people, so how to get across a sense of a personality is the trick. Certainly easier said than done at times. :-)