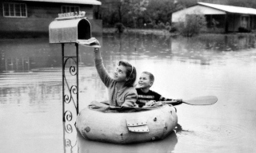 Regular readers know that I don't spend a lot of time here on nonprofit fundraising strategies. However, this gem of a post slid into my email box this morning via a Google Alert for "nonprofit" and I felt that I needed to share. Here's what at least one donor thinks about how many nonprofits handle the fundraising process:

We don’t like being annoyed with repeated mailings. We really don’t care whether our “member” status is on the line. And we really, truly aren’t fond either of unrequested merchandise (we’ll make an exception for a really good calendar) or the guilting of sending stamped return envelopes. . .

For every nonprofit/charity we support now, there’s another within the same general sphere that we could substitute. Given some of the examples we see now, we’re inclined to suspect that some of those will nag us a whole lot less–and most of those will spare us the trinkets.

And here's what he's thinking of doing about it:

Maybe it’s time to do what we thought about last year. Just a simple spreadsheet (or another page on the donations spreadsheet we already have). One number per group. Add one for each mailing we receive. Add five for each unrequested trinket we receive. When giving time comes around, subtract two from the total, multiply by five, and modify last year’s donation by the resulting percentage. In other words: Send us three letters, lose 5%. Send us six letters and two trinkets, lose 70% of this year’s contribution. (Send us just one letter a year…and the contribution goes up 5%.) There are always worthwhile places to send that freed-up money.

While Walt notes that nonprofits like Second Harvest and Doctors without Borders do a find job of raising money without annoying donors, many others seem to not get this. Note that in comments another donor has now resorted to using a sharpie to black out any identifying information when she sends in a check to avoid being put on mailing lists. She also refuses to use credit cards or Paypal for her donations for the same reasons.

Seems pretty drastic and like a lot of nonprofits may need to be re-thinking their mailings.

If a nonprofit is driving you buggy, it's worth writing a letter asking them not to send solicitations. Or to ask, just send me one reminder per [fill in your preferred time period]. I don't do fund development either, but I've talked to fundraising professionals who tell me many - though not all - nonprofits take such letters seriously. And they've got software they can program to keep you out of their quarterly/monthly/weekly mailings.

My pet peeve is nonprofits that send me address labels with the title "Mr." in front of my name. At least I don't feel any guilt when I don't send a donation.

Hi Bronwyn--that's good advice for people who are going nuts with the solicitations. Thank you. And I agree about the "Mr" thing. I've had that with Michele because people think it's "Michael." Annoying!