Want to Get People to Pay Attention in a Meeting or Training Session? Bring in the Toys! 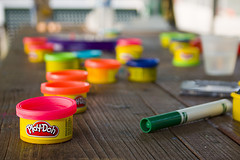 The other day I had to meet with 20+ high school seniors, so I decided it was time to go back to one of my tried and true meeting strategies--Toys. It was so successful (as it always is), I thought I'd share the idea.

Bring on the Play-Doh!
About 9 years ago I was doing a retreat with 30 people. This was for a nonprofit that provided manufacturing training and about half of our group was made up of the trainees, who were extremely hands-on and fidgety when they had to sit still for too long. I needed everyone's participation in the meeting and knew that I had to do something to keep them all focused.

I'd read somewhere that if you can keep people's hands busy, they are more likely to pay attention for longer periods of time, so I thought I'd see what I could do. I ran out to the store and grabbed Play Doh, Legos and a few Slinkys and brought them with me to the retreat. I just threw everything on the table, explained why I'd brought the toys, and then waited to see what happened.

At first, people were a little tentative and looked at me like I was crazy. Then one guy grabbed some Play Doh and started forming some shapes. A woman took one of the Slinkys and began shifting it from side to side while a few more people took some Legos and started building. Within a few minutes, about 3/4 of the group was doing something with their hands.

Here was the cool thing, though. They ALL paid attention and participated in our discussions, more so than they'd done in previous meetings where I didn't bring the toys. By the end of the retreat a few days later, they were all thanking me for helping them see how they could stay focused, as many of them thought that there was something "wrong" with them that they had a hard time participating when they had to sit for a while.

Since then I've almost always used toys for training sessions, retreats, etc. I've used them with all ages, from high school seniors to senior citizens. Participants often think I'm a little crazy at first, but by the end of the day, they're generally convinced that this is a great strategy for keeping people focused. It's been particularly useful when I work with youth organizations--staff finally realize that there's a productive way to work WITH young people's energy, which is a real eye-opener for both them and the youth.

Give it a shot--let me know what happens.

I find this to be very true, toys help deepen learning. I like to use the squishy balls that are covered with tons of plastic fingers. I even have them in my company colors :)

When I was in public school I would draw elaborate doodles along the sides of all my papers and notebook pages. I was lucky to be a good student, so most teachers did not perceive this as slacking. It was really crucial to my ability to sit and listen, really the only way I could absorb the material. Taking notes and drawing wasn't something I did for referring to later (and still don't), it's about helping me absorb the learning in the moment. If I don't have a visual and/or kinesthetic input, I do not absorb or retain at all.

And you can learn some great things about participants this way, too. At my last association, we traditionally provided toys for board meetings ... and it was amazing to see how creative some of our very serious, scientific, data-driven members could be. I remember watching one board member building an entire little village of play-doh and pipe cleaners. I never would have thought he had it in him!

Christine, I think you're absolutely right about the kinesthetic value of using toys. I work with a lot of populations who did not do well in "traditional" school settings and for many of them, not even doodling was allowed--it was considered to not be on task. That's why I love introducing this exercise with those groups because it's like a lightbulb goes off for everyone.

And Lisa, I love the image of the elaborate village of pipe cleaners and play-doh. I've had similar experiences and it is fun to see another side of people.

You are brilliant! So this is why backchanneling works so well!!!