Like Christine Martell I've clearly let my magazine reading fall by the wayside more than I realized, because the article I'm about to reference was published in April 2007, which in Internet time might as well be April 1997. At any rate. . .

Last week I finally got to read Wired Magazine's The See Through CEO, which is a must-read for everyone. Some choice quotes:

Google is not a search engine. It's a reputation management system. . . Online your rep is quantifiable, findable and totally unavoidable.

A single Google search determines more about how you're perceived than a multi-million dollar ad campaign.

Being transparent, opening up, posting interesting materials frequently and often is the only way to amass positive links to yourself and thus to directly influence your Google reputation.

The reputation economy creates an incentive to be MORE open, not less. Since Internet commentary is inescapable, the only way to influence it is to be part of it.

The entire premise of the article is that 1) your reputation is made and broken by your Google search rank and results and 2) the only ways to positively influence your results are to use social media (like blogs) to be as transparent and authentic as you can be--radical transparency as the order of the day.

What does it meant to be radically transparent?

Lately I've been thinking a lot about online identity and it seems to me that a big part of it has to be about transparency. Some people think they can escape the need for transparency by escaping being online, but which is worse--having someone see you and know that you have some flaws or being invisible? Seems like a no-brainer to me. 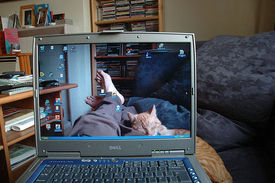 I know that it's really hard to be this transparent. It's scary--what happens when they find out you've screwed up? Or if you show them that the process of doing what you do is really messy? But the thing is, someone will inevitably discover it anyway, so it's better for you to put the story out there first and to admit where you went wrong or that you aren't perfect than it is for you to pretend like everything is always great. Then you control the message. You control how the situation is perceived and handled.

One of the great advantages to this kind of transparency is that people like you more. They see you as human. They want to help, to provide you with their advice and good ideas and support. It's crowdsourcing at it's best. I think it's because we relate more to people who share their vulnerabilities, rather than to those who pretend they always have their act together.

I think we learn more from transparency, too. One of the things I find is that when I'm trying to hide things from other people, I'm often trying to hide them from myself, too. If I don't want others to know my process, then I'm also not thinking very much about it. A policy of transparency helps me become transparent to myself, too--I'm more willing to take a hard look at what I do and how I do it because I'm trying to make it comprehensible to others. In that process I help both myself and other people. It improves my learning.

So here's the question--do you and/or your organization have the courage to get naked? The rewards are rich, but it can also be a pretty painful process, especially when you first start to expose yourself.

Hi Michele,
Wow! That was an attention grabbing title! And as usual an excellent thought provoking article.
Thanks!

Yes, part of my better blogging training--get better titles! :-) Let's see what this does to the types of traffic I get, though.

Michelle,
Loved this post! I believe we are all too worried about people seeing the real 'us' and it rolls over into our businesses. I had just not really thought about transparency in the nonprofit in this way. Thanks again. Karen

Thanks, Karen--I agree with you 100% that we're too worried about being the "real us." And for me what happens is that I then lose sight of what the "real me" even IS. I think organizations suffer from the same sort of identity crisis--a sort of split between how they really are and how the begin to perceive themselves based on the face they think they're presenting to the world. When we buy into our own PR, then it's a real problem. I think it's better to try to stay authentic, although it can be really, REALLY hard!

I thought this was a great post and article too. I'm not 100% convinced by the article's assertion that transparency must always be all or nothing, at least not for individuals. I think there's still some times when people need some privacy or the ability to be anonymous/pseudononymous.

I quoted both you and the Wired article in a discussion in an online networking group I'm in, and got some fairly nasty responses from the moderator. The moderator mentioned how she's advising college students doing job searches to not just clean up their Facebook profiles but to delete discussion board posts and contact Google to remove cached copies of unflattering content. I'd previously posted about the Wayback Machine and the fact that even if you can have something removed from the Google cache, it's potentially still out there somewhere. Besides the fact that I think trying to remove all unflattering content is a losing battle, I don't think it's really the right way to go. So you made mistakes--you're human. If you have enough good out there, the good outweighs the bad. It also gives people a chance to see you as a whole, complex person.

I was frankly shocked by the negative response, especially from someone who's all about online networking. Besides saying I was dogmatic for disagreeing with her approach, she argued that no one has an obligation to have an online identity. She says transparency is just a "goofy" philosophy based on "no data, but an ethereal presumption that people will like you more if they know more of your foibles -- and certainly no application of those free-floating impressions to the very specific and often brutal world of job-search." I think she really believes that transparency hurts people's chances in business.

Have you come across anyone else with such an averse reaction to transparency? I find it a little scary sometimes, and I have to fight being a perfectionist. I understand it's hard, and I understand being afraid...but this? I guess I'm just trying to make sense of it.

Hi Christy-- I haven't found people having that level of averse reaction at all, but to me, it sounds like this woman is trying to build some kind of business here of helping people sanitize themselves.

I think that there's a BIG difference between cleaning up your Facebook profile to remove references to drinking, partying, drug use, etc. and being transparent about your business and work processes. I don't think anyone's suggesting that we should be so transparent as to show all of the seamier sides of ourselves and our private lives--we're talking about a transparency that allows for you to have some doubts, be confused, make mistakes in your work, etc.

While we may not have an "obligation" to have an online identity, I certainly think it would be foolish to not have one. I'm sorry, but when most of us are Googling people, that means we'd be in better shape to have something online rather than nothing at all. And I think that in the future it will be even more of a requirement.

I'm with you--I don't get the people who are this crazy about the fear tactics. I think it's that THEY are living in fear and so they need to spread it to everyone else. Or maybe it's that they don't really understand what we mean when we're talking about transparency. That WIRED article wasn't about people letting it all hang out re: their personal lives--at least not the way that today's college students do it. It was about people being open about their work lives and processes and I honestly think that you always win when you do that and use that as learning experiences. I wonder if she even read it.

I agree that cleaning up the Facebook profile makes sense, especially for college students who are making the transition into the workplace. And you're right that there's a difference between personal transparency and professional, even if the line is blurry sometimes. But I don't think it's an either/or proposition, where you can either delete the negative stuff or create positive stuff; I think people should be working at it from both ends.

Maybe part of it is trying to understand the contradiction: This is someone who tells job seekers to Google themselves because prospective employers certainly will, but doesn't see any value in even mentioning that it's possible to build a positive, professional online identity.

Obligation is too strong a word, but having an online identity certainly seems like an asset for a job seeker. And I think we may get to a point where it is an expectation in more fields. It already is an expectation for fields like graphic design, and our team has talked about preferring people who blog for hiring.

You're probably right that she didn't read the article either. She mentioned that she's been flamed in the past for a lack of transparency, and she seemed to have this visceral reaction based on her past experience. Apparently, she's been criticized in the past for moderating discussions by people who think they should be unmoderated (no deleting flames or spam). She may very well associate transparency with that extreme end of the spectrum.

Thanks for replying. I'm still trying to work this all out in my brain, but your comments help.

Just a quick note to say how much I have apprenticed these series of posts about online transparency. I still haven't got my head around it all, especially in the light of some dubious attacks on midwives who have talked about their clinical experiences online. But I think I'm getting there. cheers Sarah
http://tinyurl.com/6cao4c