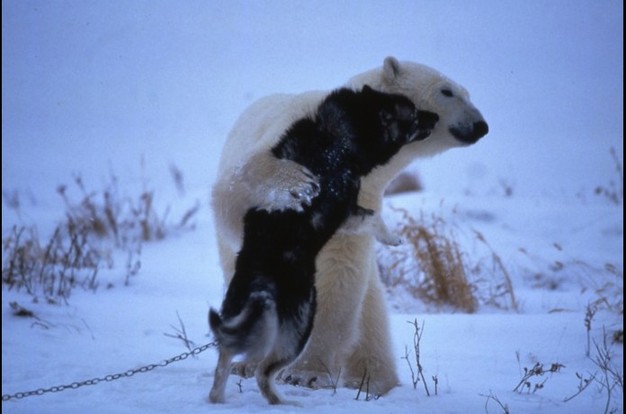 Today is September 11. In the U.S. at least, this is a solemn day of reflection on a national tragedy. It's a day when some people may think a lot about our "enemies" around the world and about how we should "protect ourselves" for the future.

Thinking about today, this afternoon I see  Animals at Play, which depicts a husky and a polar bear playing together. The polar bear hasn't eaten in four months. He's starving. Instead of eating the dog, however, they begin to play, each making himself vulnerable to the other. Despite being from different species, despite the fact that on other occasions, the dog would be food for the bear, they play. Every day for a week, that bear returns for another round and they do it again and again.

As an animal lover, this is a fabulous metaphor...I'll plop it into our educational post on Shaping Youth called "The 411 on 9-11" about talking to children re: headline news. http://www.shapingyouth.org/blog/?p=624 Many thanks, Michele!

Thanks, Amy--what a constructive, fabulous resource you have on talking about 9/11 with kids!