Home For Organizations Speedy Startup Entrepreneurial Programs Leadership Programs Projects & Presentations Contact
How I Organize Myself to Write a Blog Post
31 Days to a Better Blog--Days 18 & 19: Sneeze Pages and Responding to Comments

The last day of Reader Questions and this morning I had something from Sky who asked me for a clearer version of my Personal Learning Environment Mindmap from April.

Since this is about the fifth time someone has asked me for it, I decided that I needed to create a version that is more easily readable. With the first version I had to resort to a screen capture, but that wasn't doing it, so I headed over to Mindomo, about which I've heard many great things. It worked great (I'll go into details in a later post) and in no time I had a re-do of the map which you can see here.

In recreating that original map, however, I realized that I've made some changes in the past several months, so I did a revised version of where I'm at now, highlighting the new tools I'm currently using. Below is a screencapture and the full version of my revised PLE mindmap is here. 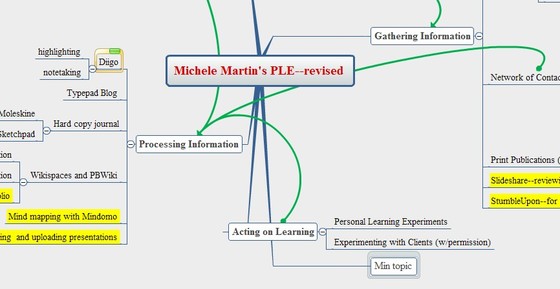 You'll see that I've stopped using  Google Notebooks and Tumblr and have been making more use of Slideshare, StumbleUpon, Facebook and Ning. I also added Firefox as a separate item, since it's so important to getting everything else going. And I found Mindomo so useful, I'm putting it into my toolkit as well.

I'm not going to go into a lot of details on how I'm using everything, as I've talked about all of this before:

Just thought it was interesting to go back and re-map things and thought I'd share.

While We're On the Topic of Personal Learning . . .
Rosetta Thurman of Perspectives from the Pipeline has an AWESOME post on using blogs as a low-cost professional development strategy. It's a must-read if you're at all interested in using social media to support personal learning.

And stay tuned for Monday's Carnival of Nonprofit Consultants when we'll see everyone's favorite learning resources in honor of back to school.

Michele, I have been looking at your vision on PLEs and I like your design, simple, clear, and getting "small pieces, loosely joined". I have been researching a lot on PLEs lately, and I have my own vision and practical implementation for my own PLE.

I would appreciate if you take a few minutes to take a look at 2 small posts where I summarize all that, and give me some feedback as I am doing right now with you:

Thank you in advance.