Home For Organizations Speedy Startup Entrepreneurial Programs Leadership Programs Projects & Presentations Contact
NPTech Tag Mash-Up Saga Continues
"You Get What You Inspect, Not What You Expect"

Three Reasons to Blog About Your Mistakes 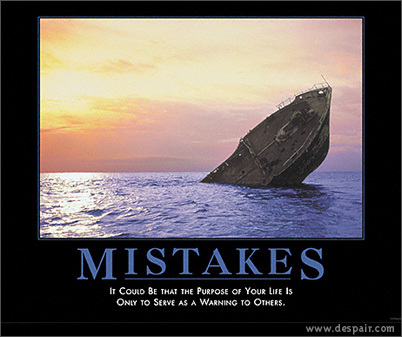 ProBlogger (Darren Rowse)  had a good post today on 10 Mistakes that Will Kill Your Blog, which led me to this post on writing about your mistakes. Darren argues that one way to add personality to your blog is to write about those times when you screw up. Good advice that got me thinking about when you should blog about your mistakes.

When You Make a Public "Goof"--Last week, Vicki Davis of Cool Cat Teacher was the victim of an  Internet spoof. She had already posted about it by the time she realized she'd been had. Always a pro, though, Vicki had the  grace and courage to update her post to indicate that she'd made a mistake.  A lot of people would have been tempted to just remove the post and pray that no one had seen it, but Vicki (ever the teacher) left it up so that the rest of us could learn from her experience.

Something similar happened to me when I got all excited about setting up some searches, only to discover that they didn't really work well as I thought they did. As a perfectionist I will admit that I briefly considered removing the post, but decided that part of wanting to be an authentic blogger is being willing to admit when you screwed up. (Although I would still prefer to be perfect).

When Someone Else Can Learn From Your Mistake--Beth Kanter frequently posts about her learning experiments. Whether she's exploring widgets, wikis or fundraising, she shares whatever she learns, including the places where she's made mistakes or would do something differently the next time around. As a trainer, I often talk with groups about how we learn more from our challenges and mistakes than we do from our successes. Blogging about it is another way to learn.

When You Want to Show Your "Human Side"--If you're blogging for personal reasons, you probably get a lot of blog fodder from your screw-ups. In fact some people pretty much make a living sharing all of the ways they've made mistakes. But if you're blogging more professionally--either for yourself or for your organization--you're probably less inclined to share goofs because you worry they take away from your credibility (or is that just me?)

The result, though, can be the appearance of perfection that, frankly, can get pretty annoying (or at least I tell myself that). While you don't want to blog every day about mistakes (that will ruin your credibility), it can show another side of you if once in a while you share something you messed up.

So those are the reasons I can think of for blogging about mistakes. What about you? Are there other circumstances when you think you should share? Have you ever blogged about a goof? What happened?

UPDATE--Let's add one more to the list, courtesy of Vicki Davis in comments--Your blogging mistakes hang around forever in feeds, etc., so better to get the correction out there so you don't lose credibility and leave your readers with the goof. . .

(Print is from my favorite site, Despair.com, home of all things demotivational. My dream is to one day decorate an office with only these prints)

Excellent point, Vicki! You can definitely lose credibility with your readers if you don't correct your mistakes and it's certainly not fair to leave them with the error.

Mistakes are your best teachers. I'm the queen of mistakes. It's the way I learn best.

And my last widsom on mistakes
http://beth.typepad.com/beths_blog/2005/11/are_mistakes_a_.html