Making Messages Stick Part One: Introduction to "Made to Stick' 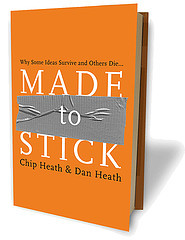 Back in November I was doing some thinking on Malcolm Gladwell's notion of "sticky ideas"--those messages that are really memorable and spur people to action. While Gladwell did a great job of describing what happens when messages are sticky, he didn't spend a lot of time talking about how you can actually make your message sticky. Fortunately Dan and Chip Heath decided to dig into this topic a little more deeply in their new book, Made to Stick.

I got this book around Christmas. Unlike poor Beth Kanter,  I actually got to finish my copy, and it's been on my mind for a few weeks now. As I'm working on some projects that require me to make my ideas VERY sticky, it seemed like this might be a good time to blog a bit and get my thoughts in order. I actually plan to do a series of posts on the book because it's pretty meaty and worth digging into more deeply. So here goes . . .

For an idea to stick, to be useful and lasting, it must get the audience to:

Sounds pretty simple, right? Except that we often fail at getting audiences to do any of this--often from the get go.

In Made to Stick, Chip and Dan help us remedy that. They outline six major principles that make an idea sticky:

Simple--Stickiness means focusing on an essential core idea. Ideally, the idea is profound AND simple, as simple doesn't mean simplistic. Proverbs are a good example of a simple, profound thought.

Unexpected--For people to pay attention to an idea, it must violate their expectations. The human brain is remarkably adaptable and will habituate itself to stimuli after surprisingly few exposures. Sticky ideas wake our brains up by jolting us out of our habits. When Southwest flight attendants began cracking jokes during the safety features review, that was unexpected. That got people's attention and got them talking about Southwest.

Concrete--Sticky ideas are concrete. They operate in the world of our senses and in human action. One of the problems with "experts" is that they tend to use more abstract language. This makes it harder for non-experts to understand what the expert is talking about. But when you're introducing an idea that's new, you must do so with concrete examples so that your audience can "see" or "feel" what you're talking about.

Credible--Of course people must believe in the idea for it to stick. Sadly, the idea doesn't actually have to BE true. It just has to APPEAR to be true because it's backed up by some sort of statistics or recommended by a reputable person. Urban legends, for example, are incredibly sticky because the SEEM like they could have happened to someone (in fact, in the stories they usually have). If your friend's cousin said it was so, then there MUST be people who are stealing your organs!

Emotional--While we like to believe we are rational creatures, acting on the basis of fact, the reality is that we are guided primarily by our emotions. Sticky ideas appeal to our emotional side, the side that wants to connect to other people, as we're wired to do.  That's why donors are drawn in by the idea of paying for a poor child in Africa, but NOT by the idea of paying for the nonprofit's electricity.

Stories--Humans have always told stories. We respond to them, see ourselves acting through them. Sticky ideas tell a story that allows us to mentally rehearse, to prepare for action.

Naturally our stickiest ideas will possess all of these characteristics. The fewer of these traits our idea has, the less sticky it is.

Now look back at the beginning--remember that there are several things we need an audience to do in order to have the idea stick? Well we can map these principles right back to each of those steps:

All of this, of course, assumes that you've started with a simple idea. And simplicity may be the hardest part to get right. At least it is for me, because I possess the "Curse of Knowledge," as Chip and Dan call it.

But that's a post for another day. Tomorrow, in fact, when I want to talk about how knowledge can actually get in our way and what we need to do to make our ideas as simple as possible.

Great book review!! I just got another book, but luckily my husband didn't take it. My kids really want me to read it - it's about how kids learn with video games

With you Michele and Beth. Made to Stick simply sticks, hard. From the cover design -- complete with duct tape -- to its succinct approach to conveying only the most critical content.

Most critically, communicators have to beware the Curse of Knowledge. Heath Brothers tell more how to stay away, summarized in my review at http://www.gettingattention.org/my_weblog/2007/01/make_your_messa.html

Michele, nice to see you next to me in the Carnival! This book has some profound insights especially for non-profit messaging! Congrats and nice to meet you! The cotton candy is on me!