Made to Stick Part Two: To Make it Stick, Keep It Simple 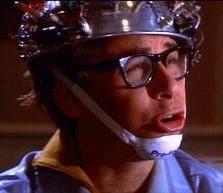 Think about the last time you were reading e-mail and talking to your partner at the same time. If you're honest, you'll recognize that you were really only paying attention to either reading your e-mail or talking to your partner. The other activity was happening on auto pilot. Our brains simply can't apply full attention to more than one idea or activity at a time.

That's why Chip and Dan Heath's first rule of stickiness in Made to Stick is that the idea you want to make stick must be simple. It must be the core of an idea, it's very essence. Otherwise, people will be distracted and unable to make a decision. Since the point of a sticky idea is to ultimately move people to action, they must be able to identify your idea. When you say three things, you say nothing.

The problem for most people in getting to the core idea is that it forces us to radically prioritize. We must strip away all of the ideas that are important, but not essential until we are at the idea that is the most central and critical.

Let's use Southwest Airlines as an example of getting to the core. They are THE low-price airline. Their central idea is that they will be the lowest fare in any market in which they operate. This means that everything they do is evaluated against that idea. Herb Kelleher, the former CEO, tells a story about how they use the idea internally:

"Tracy from marketing comes into your office. She says her surveys indicate that the passengers might enjoy a light entree on the Houston to Las Vegas flight. All we offer is peanuts and she thinks a nice chicken Caesar salad would be popular. What do you say?  . . .

You say, 'Tracy, will adding that chicken caesar salad make us THE low-fare airline from Houston to Las Vegas? Because if it doesn't help us become the unchallenged low-fare airline, we're not serving any damn chicken salad.'"

In Southwest Airline's case, there are other important ideas about them--they are a fun place to work, for example--but fun is not the core. Low cost is their core. And everything they do is measured against that.

Finding the core idea is important because it helps people avoid decision paralysis. Studies show that when people are operating in an environment of uncertainty, they can become paralyzed by choices and will often make NO choice, even if their choice is between two good options. When we keep our idea simple, we can make the choice for them in the sense that they aren't paralyzed by having to figure out which is the most important idea out of several options.

Simple = Core + Compact
Getting to the core of the idea is one issue. But simple also means expressing the core idea in a compact way. The Golden Rule is a great example of this concept--"Do unto others as you would have them do unto you." A simple idea, economically stated, but so profound you could spend a lifetime implementing it.

How to make your core idea compact? The Heaths suggest tapping into what your audience already knows by tapping into their "schemas." A schema is a psychological term for a collection of generic properties of a concept or category. When you hear the word "car," that calls up all sorts of associations for you. You see a picture of a car in your mind, but you may also have emotional connections to cars because you and your dad worked on them when you were a kid or you were in a bad car accident at one point.

When we tap into people's schemas, we shortcut the process of learning for them. People can make all sorts of connections between their schema and the new idea that you're presenting. That's why analogies and metaphors work so well--they help people understand a new concept or idea in light of one they already understand. The best analogies allow audiences to deepen their understanding of a new idea by delving deeply into what they know about the analogy and then applying it to the new concept.

The Enemy of Simplicity
Why do we have so much difficulty making an idea simple? Because we are under the "Curse of Knowledge." Once we know something, it's very difficult for us to return to what it felt like to NOT know something. Once I can play the piano, it's difficult for me to put myself back into the mind of someone who doesn't know how to read music or move their hands across the keyboard.

Techies are notorious for having this problem. You call with a computer question and the next thing you know you're knee deep in motherboards and processors and have no clue what they're talking about. Nonprofits are offenders in this area, too. We often have program-specific jargon that we all understand because we've been in the business. But outsiders are left completely confused by what we believe is perfectly comprehensible.

Somehow we have to remove the Curse of Knowledge and get back to the Zen practice of "beginner's mind." We have to be able to put ourselves into the shoes of someone who knows nothing about our idea and figure out how we can make our idea simple enough to appeal to them.

Talking to people outside of our normal circles is one way to test the simplicity of an idea. I also believe that you get an "aha!" feeling in your gut when you've finally hit on your central idea and stated it well. "Maximize shareholder value" isn't a core idea that gives me an aha. But "We're going to be the lowest-fare airline in every market," DOES give me that feeling. It's the difference between being able to see the path to clear concrete action and having that path obscured.

So the first test of stickiness is finding your central idea and stating it in a simple, profound way. Once you've done that, it's time to move on to how you present that idea to an audience. We'll take a look at how that works in several future posts.

Note--for more on schemas, read George Lakoff's tutorial on "Framing," which describes how conservatives have made phenomenally successful use of schemas.

Posted at 09:30 AM in Made to Stick, Marketing, Tools and Resources | Permalink | Comments (0)