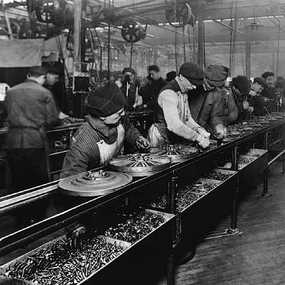 Jayne Cravens of Coyote Communications has written a provocative commentary on the growing digital divide among nonprofits. She asks a powerful question:

"I'm on dozens of online communities, most of which relate to nonprofit organizations and civil society in some way. I also attend onsite conferences each year relating to the same sector. Through these online and face-to-face gatherings over the recent years, I'm seeing a disturbing trend: a gap between those organizations in the USA that are using the Internet in a myriad of ways to support their missions, and those who are still largely on the sidelines and not using network technologies in working with their volunteers. The question is, are these sidelined nonprofits there because of lack of access to resources, or lack of will to embrace them?"

After several recent conference experiences, Jayne comes down squarely on the side of lack of will, a result of command and control, top down organizational cultures that see technology as the responsibility of the Tech department, not as a critical component of their organizational strategy:

Nothing illustrates this contrast in organizations better than two conferences I attended in 2006.

At the first, a major international conference, I spoke to a room full of veteran volunteer managers and representatives of long-established nonprofits. I talked about online volunteering and online communities. From the feedback I received, these were brand new concepts to most of the attendees, even though the practices have been around for many years. No one expressed interest in immediately exploring the practices, feeling that it was something to think about, but not to urgently implement. For them, volunteer management is a top-down endeavor, and technology use in working with and supporting volunteers is something to think about someday, when there's time. Two people even said that they would be providing my materials to their tech staff, implying that it was up to the tech staff to decide if these activities would be pursued.

At the second conference, even tiny nonprofit organizations with entirely volunteer staffs were using computer and networking technology to involve volunteers, donors, advocates and the general public in a variety of mission-based activities. These organizations were very much focused on giving their volunteers a bigger voice at the organization - and, in the end, actually giving these volunteers lots more to do, an increase in work load that the volunteers liked very much. These organizations also had a focus on engaging in activities that exude transparency and openness in all aspects of decision-making and management, and on being immediately responsive to volunteers' and other supporters' thoughts, suggestions and criticisms. Their volunteer involvement is focused on their staff always listening and acknowledging what they have heard from volunteers, by action as well as by words. They made their volunteers feel included and energized, not with pins or mugs or luncheons, but through greater and more-meaningful involvement, through ongoing, interactive support, through greater responsibility, and through actions that showed volunteer feedback had been heard.

In earlier posts, I've talked about the more technical aspects of this digital divide and  strategies to effectively ride the innovation curve. But Jayne brings up the other part of the equation--the openness of nonprofits to the idea of a culture that encourages collaboration and two-way communication.

For those nonprofits to whom participatory culture is as natural as breathing, there's a strong impetus to learn the new technology tools because these fit naturally into their mission and their organizational culture. But for nonprofits that have always relied on a command and control structure, learning these tools can be not only unnecessary, but threatening to their way of life.  New media asks for a level of transparency and "letting go" on the part of organizations that does not fit in to their way of operating in the world. It demands skills that they haven't developed and asks them to fundamentally change the ways in which they do business.

While access to and information about new technologies is important, it is this fundamental need to change organizational culture that may ultimately be the biggest challenge to adopting new media. It's one thing to say "your organization needs a website," which was the change demanded in the first round of Internet-enabled communications. That's still one-way communication that can be controlled by a few people within the organization. But when we start looking at tools that require information sharing, transparency and the ceding of control to volunteers and employees, that is quite another story. It's a cultural shift akin to Henry Ford's assembly line, which fundamentally changed our society.

That, in the end, is what makes this phase so challenging. As Ford's practices were adopted, few organizations were equipped to handle it. They didn't have the management structure or practices--they didn't even have management as we know it, as that's part of Ford's legacy. Some organizations were able to adapt and change and they survived in that new world. Others were not able to make the shift and they did not survive. I'm sure that many of them thought "oh, this is just a fad, it'll go away" or "I don't really need to worry about this--it doesn't apply to my business." I suspect that those are the organizations that found themselves out of business within a year or two.

In my opinion, we've let the genie out of the bottle with new media. People have expectations that they can and should be able to get information about anything, that they should be able to participate in the creation and dissemination of information related to topics and causes that interest them. Ultimately I think they won't accept the old way of doing things and the pressure will mount for non-participatory organizations to change their ways. The question is, will they be able to do so in time to survive?