Innovating Along the Curve

So on Friday I was doing some thinking about the diffusion of technology into the nonprofit sector. In other words, what will it take for us to reach critical mass in the use of social networking/Web 2.0 technologies? One area that I think deserves a closer look to remind us of where we've been and where we're going here is Everett Roger's Diffusion of Innovations Theory.

Diffusion theory examines five critical areas that influence the rate at which an innovation reaches "the tipping point." These are:

Let's talk about each of these in more detail as they apply to social networking and Web 2.0.

Characteristics of the Innovation--Web 2.0 technologies are by their nature social innovations. They encourage individuals to interact with other individuals and their success depends in large part on the involvement of communities in using and developing them. I can blog until I'm blue, but if I'm the only one reading what I write, then I'm talking to myself. And if I'm not interacting with others and they aren't interacting with me over the content, then I'm really missing both the point and the promise of this wave of media.

1) Knowledge – person becomes aware of an innovation and has some idea of how it functions,

2) Persuasion – person forms a favorable or unfavorable attitude toward the innovation,

3) Decision – person engages in activities that lead to a choice to adopt or reject the innovation,

4) Implementation – person puts an innovation into use,

5) Confirmation – person evaluates the results of an innovation-decision already made.

While this decision-making process is done on an individual basis, Rogers found that these individual decisions were, in fact, heavily influenced by the decisions of others within the same system. So, for example, looking back at the spread of e-mail--your decision to use e-mail was influenced by the number of people who asked you for your e-mail address. At first, only a few people wanted one from you. Eventually, it got to the point where having an e-mail address was the same as having a phone number--you're on the margins of society without one.  Essentially we reached a tipping point, which was somewhat predictable if we consider the next important factor.

Characteristics of Individuals--Rogers found that there were essentially five types of people involved in the adoption of innovations:

Rogers then arranged these groups into the innovation adoption curve: 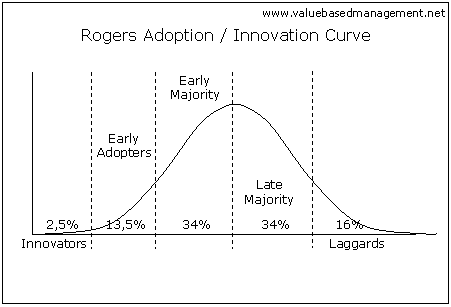 It's important to recognize that this curve applies to the systems in which people operate. If we think about nonprofits, they're operating within their own world, their own system. Even individual nonprofits are their own system, with each agency having its own innovators, early adopters, etc.

When it comes to the use of social media in nonprofits, we are clearly in the leading edge of this curve, working with the innovators and early adopters within the nonprofit system. The curve reminds us that there's no point in trying to convince EVERYONE to adopt the technology. We need to be identifying the opinion leaders within the system and working on them, recognizing that the rest of the group will come later.  This will influence our work with individual organizations, too, as we need to be able to find the early adopters who are in a position to champion the cause internally.

Consequences for adopting the innovation--To adopt the innovation, individuals need to see that the benefits of the new way will outweigh the hassle and stress of doing something differently. In my experience, many nonprofits can be protected from the natural consequences of their decisions to NOT adopt a technology. For example, the government-funded organizations with which I do a lot of work will continue to get money whether or not they change the ways they do business. They may not get as much money or do as much good, but they often operate in survival mode anyway, not seeing technology as a way to do things more efficiently or effectively, but as a cost of doing business that can be cut when you need to. In the business world, if you don't adapt, you will go out of out business. Not necessarily true in the nonprofit world.

Communication Channels used in the adoption process--The whole point of Web 2.0 is to enhance collaborative communication. A hallmark of the system is embedding communication into the technology. So, for example, social networking sites make it easy for you to recruit other people to use the site. Same with things like wikis and blogs. This is great for people who are living on the Web anyway, but I'm not sure that this works as well for nonprofits. Again, speaking based on my own experiences, I just don't see the same "living on the web" mentality in nonprofit staff that I see in other industries. I think we'll have to explore other communication strategies to pull people into the tech and to show them in very concrete ways what we're talking about when we say "social media."

So What Does All This Mean?
To me, there are a few take-aways that we need to consider here:

I'm sure there's more here that I'm missing. I'd love to hear what others are thinking about this and how you think we can influence the adoption curve.