Getting to the Tipping Point

We've been talking about how to engage nonprofits in technology and the influence of the innovation curve. What I wanted to think about today was getting to what Malcolm Gladwell calls "The Tipping Point"--that space where an idea moves from the fringes to the mainstream. What needs to happen for us to tip over?

I suspect that part of the issue in encouraging nonprofits to use technology lies in the fact that we're working with individuals who want to connect to people, not to computers. And even though the new breed of tools is all about communication and collaboration, I'm not sure that the more social individuals want to connect through a computer as much as they want to see a real living breathing human in front of them. Just a thought.

Three Types of People Who Help Us "Tip"
Gladwell suggests that there are different types of people who play key roles in tipping an idea. David Armano has a great graphic to represent what they do and how they connect and also does a nice job of summarizing the three types: 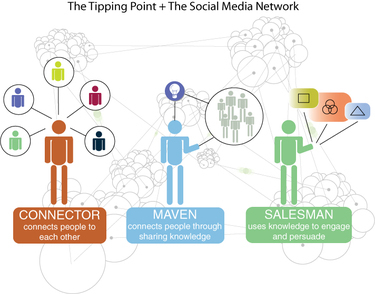 The Connectors, Mavens, and Salesmen help fuel the growth of the Social Media Network (shown behind).  Each type of individual possesses a complimentary quality that when combined, creates an infectious momentum which spreads rapidly.

* Connectors: Those with wide social circles. They are the "hubs" of the human social network and responsible for the small world phenomenon.

* Mavens are knowledgeable people. While most consumers wouldn't know if a product were priced above the market rate by, say, 10 percent, mavens would. Bloggers who detect false claims in the media could also be considered mavens.

* Salesmen are charismatic people with powerful negotiation skills. They exert "soft" influence rather than forceful power. Their source of influence may be the tendency of others, subconsciously, to imitate them rather than techniques of conscious persuasion.

The trick for us, then, is to determine who in our industry and organizations are the mavens, the connectors and the salespeople. I suspect that they may have to come from the ranks of the non-technical types, as it's been my experience that there can be a significant communication gap between the technical and non-technical groups. All three groups have to be able to connect in a significant way with the users, and users have to really TRUST that the people they're talking to understand the nature of their work and the challenges of using tech when you're not skilled in those areas.

As we identify individuals from these three groups--and remember, we need all three to create the right synergy--then we'll need to be figuring out how best to educate and market the ideas to them. As David points out, this may have to occur in off-line environments, at least initially because, again, non-technical people haven't necessarily embraced online culture as readily. This is part of the point, of course.

According to one recent study, mavens will be the ones in the organization who are reasonably comfortable with technology. They also tend to be more optimistic about outcomes and have a greater sense of self-efficacy. This article suggests that mavens have also been found to be "active media consumers, avidly consuming all media that touches their topics of interest; yet challenging to describe with no discernable geo-demographic characteristics."

Mavens tend to see right through attempts to "sell" them. They want an opportunity to thoroughly explore and experience the media. Once they've convinced themselves of its value, they'll start sharing what they know. So lots of chances to interact with and learn about new tools will be the best way to "market" to mavens.

Connectors are easier to identify, probably because they will have identified YOU. From a review of The Tipping Point:

Connectors     are “people with a special gift for bringing the world together.” They     aren’t intimately familiar with all of them, that wouldn’t be possible.     Instead, they cultivate what sociologists call the “weak tie” – friendly     acquaintanceship. Many Connectors move between a range of different     subcultures and niches, cultivating connections in all of them. They tend to     be gregarious, outgoing, helpful, and nonjudgmental. They are the people to     know when you need a job, because they’ll know somebody who knows somebody.     They’re also the people who need to adopt an idea or a product before it can     become an epidemic.

Connectors get their ideas about what to adopt from their connections to mavens. It's the mavens who are the "content experts" who can convince connectors that they should try something new. Then it's the connectors who start telling everyone about it.

Identifying and Influencing the Salespeople
Salespeople are the "arm twisters" who motivate people to take action.  According to Gladwell, salespeople are the ones who are able to pick up on and mirror subtle physical cues that put them "in synch" with those they are talking to. In this process, they are then able to take the lead in the "dance" of a conversation and send their own powerful emotional signals to others, persuading them to buy.

The Synergy of the Three
For an idea to tip over, you must find and harness the power of all three of these types within the early adopter group. Without the three groups working together--mavens to research and inform, connectors to network and salespeople to persuade--an idea won't take hold.

There's one more factor that influences whether or not we reach a tipping point--the "stickiness" of the idea, but I'll save that for another post.